But every acre of wilderness safeguards much, much more than stands of ancient Western red cedars and free flowing waterways. Each acre also ensures protection for every living thing that calls the forest or stream its home. Washington’s native species would be nothing without the expansive natural forest ecosystems we work so hard to protect, nor would the forests be as healthy and vibrant as they are without the wildlife inhabiting them. That’s why Washington Wild’s wildlands and waters campaigns are wildlife campaigns, too.

Washington Wild is a founding member of the Wild Olympics Campaign, and is working to pass legislation that will establish 126,000 acres of Wilderness in the Olympic National Forest, as well as designate 19 rivers and their tributaries as Wild and Scenic. Ultimately, the effects of these protections will be far greater in scope than just Olympic National Forest. At the headwaters of these rivers and streams, healthy forests are vital for keeping water clean and cold. Because these rivers eventually empty into Puget Sound, what happens to these waterways upstream affects not just the water quality downstream, but also has ramifications for the entire Greater Puget Sound Ecosystem. Here are a few native species that will benefit from healthy forests and rivers on the Olympic Peninsula. 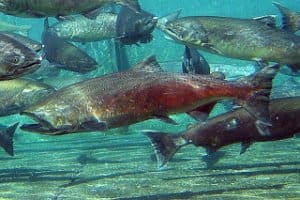 The Chinook salmon belongs to the family Salmonidae—a group of fish consisting of salmon (both Atlantic and Pacific), trout, char and grayling, to name a few. It is the largest pacific salmon species, earning it the nickname “King Salmon”. It’s not uncommon for adult Chinook salmon to weigh upwards of 40 pounds and reach three feet in length. Like all salmon, Chinook are anadromous, meaning they’re born in freshwater streams, and after spending a few years in the ocean, they return to the waters of their birth to spawn. Chinook salmon will spend anywhere from 3 months to 2 years in freshwater before migrating to the ocean, where they can stay for up to 6 years, feeding on smaller fish. Once adults are ready to spawn, they migrate back up the river they swam down as juveniles.

Chinook salmon are an extremely important part of marine ecosystems in Washington State. As large, predatory fish, they regulate populations of smaller fish while serving as food for larger predators like orca whales and harbor seals. Even after death, Chinook salmon continue to provide ecosystem benefits. Their decaying bodies are packed with nutrients that are important for many species—from large carrion birds to insects and bacteria. Salmon eggs benefit from the nutrient-rich water surrounding their parents’ carcasses, and there is even evidence to suggest that when an eagle carries a salmon to its roost, the fish’s body helps fertilize the tree and surrounding forest ecosystem.

Unfortunately, Puget Sound’s Chinook salmon populations are threatened by a variety of human activities. Over the last several decades, Chinook salmon populations have experienced dramatic declines. While there is certainly no single cause for this decline, some of the most serious threats facing these salmonids are hydroelectric dams and logging. Dams block important migration routes for adults, as well as divert natural flow regimes which results in higher water temperatures and increased silt and debris in streams. Logging in national forests has significantly altered the quantity and quality of salmon spawning habitat. Important salmon streams have experienced degradation of water quality and rising water temperatures—both of which can be fatal to juvenile salmon. If the Wild Olympics proposal is passed, 19 of the rivers that are so important to the success and conservation of Chinook salmon will be designated as Wild and Scenic. This means that the construction of dams and other alterations of the waterways will be prohibited, maintaining natural, free flowing rivers that promote healthy salmon populations. 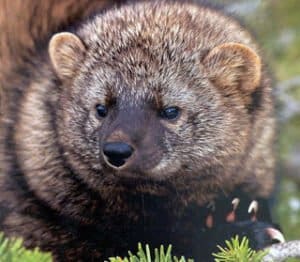 The fisher is a North American mammal similar in appearance to a weasel that is about the size of a house cat and has thick, glossy brown fur. Despite its name, it rarely eats fish and usually preys on small mammals such as mice, voles, shrews, and squirrels. They’ll occasionally hunt for birds and insects, and they’re one of the only animals known to be able to prey on porcupines. The fisher’s name actually comes from the colonial Dutch word fisse, which is the name for the European polecat, an animal that bears a resemblance to the fisher. Being mostly solitary animals, fishers only encounter others of their species for mating purposes. Fisher reproduction is one of the more interesting aspects of their biology, as they can control when they give birth regardless of mating time, allowing their kits to be born into more favorable conditions.

Although fishers have virtually no natural predators, they were extirpated from many parts of their historic range due to a high demand for their pelts in the 19th and early 20th centuries. Fishers once occurred throughout nearly all of the northern United States. While they’ve made a significant comeback in New England and the Great Lakes region, by the 1990’s it was concluded that there were no longer any fishers in Washington State. Since 2008, close to 100 fishers have been collected from British Columbia and reintroduced in to forests on the Olympic Peninsula. If these reintroduction efforts are to be successful, it’s imperative that the forests within the Wild Olympics Proposal  are protected from development and degradation forever, for the sake of fishers and the ecosystems that they are an integral part of. 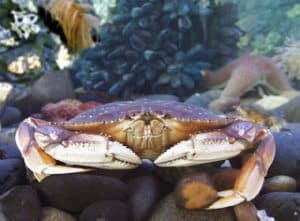 Named after the Dungeness Spit on the northern shore of the Olympic Peninsula, the Dungeness crab inhabits eelgrass beds and sandy bottoms ranging in depth from shallow estuaries to as deep as 500 feet below the ocean surface. Dungeness crabs, like most marine invertebrates, start their lives as free-swimming larvae. After metamorphosing into their juvenile form, they spend the next two years foraging on small fishes and other invertebrates before reaching sexual maturity. During this time, they will molt their shell, or carapace, several times in order to grow larger. Once they are sexually mature, males begin to seek females that are going to molt soon. Females must be newly molted in order to mate, because this is the only time that their carapace is soft enough. Upon encountering a female, the male will hold her in a “pre-mating embrace” until she has molted and is ready to mate. These embraces can last as long as two weeks. Large females can carry up to 2 million eggs! She carries these eggs on her underbelly until they are ready to release into the water and start the cycle anew.

Because Dungeness crabs spend a significant portion, and sometimes the entirety, of their lives in estuarine waters, their success is contingent on the quality of the rivers and streams that feed in to these estuaries. They are particularly sensitive to changes in water quality and temperature during their larval stages. Virtually all of Washington’s coastlines provide suitable habitat for Dungeness crabs—Hood Canal and the shores of the Olympic Peninsula make up a large majority of this habitat. As part of the Wild Olympics proposal, Wild and Scenic Designation would be granted to 19 rivers and their tributaries on the Olympic Peninsula—most of which t ultimately empty directly into important Dungeness crab spawning grounds. These large crabs are currently the most commercially important crab in the Pacific Northwest, as well as an important part of nearshore marine ecosystems. To ensure their success as a species it’s vital that Washington coastal waters stay clean and healthy, and the protection of the rivers that feed them is the first step.

By supporting Washington Wild you will not only be helping to protect our wild lands and waters but also the animals that depend on them.