But every acre of wilderness safeguards much, much more than stands of ancient Western red cedars and free flowing waterways. Each acre also ensures protection for every living thing that calls the forest or stream its home. Washington’s native species would be nothing without the expansive natural forest ecosystems we work so hard to protect, nor would the forests be as healthy and vibrant as they are without the wildlife inhabiting them. That’s why Washington Wild’s wild lands and waters campaigns are wildlife campaigns, too. 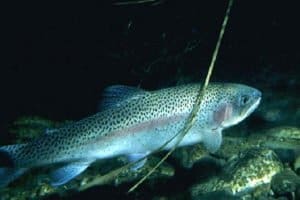 The steelhead is a special type of rainbow trout, which is closely related to the pacific salmon species. While rainbow trout and steelhead are the same species and are both born on gravelly river bottoms, rainbow trout remain in the rivers where they were born, and steelhead venture out to the ocean. A marine environment causes steelhead to develop slimmer profiles, and become larger and more silvery than their river-dwelling counterparts. Steelhead are anadromous, like pacific salmon, meaning they return to freshwater to spawn. Unlike salmon, however, which die after spawning once, steelhead will return to the ocean after spawning and can reproduce more than once in their lifetime. The timing of steelhead spawning depends on the sexual maturity of the fish at the time of its migration. Fish that are sexually immature when they migrate are known as “summer-run” steelhead because they spawn during the summer. Conversely, sexually mature migrating fish are known as “winter-run” because they will return to freshwater during the winter.

The North Fork Skykomish River in the Wild Sky Wilderness is one of the predominant steelhead strongholds in Washington State. Unfortunately, steelhead in Washington are a federally threatened species. Steelhead and other salmon and trout species are threatened by a variety of human activities. While steelhead become exceptionally strong swimmers during their time in the ocean, and can climb many waterfalls that other fish can’t, they are no match for dams. Hydroelectric dams block important migration routes for many species of anadromous fish and impede the recovery and maintenance of healthy fish populations. In order to keep rivers like the North Fork Skykomish full of steelhead, it’s important that the waterways remain clean, cold and free flowing— Wilderness areas with Wild and Scenic River protection can achieve that goal. 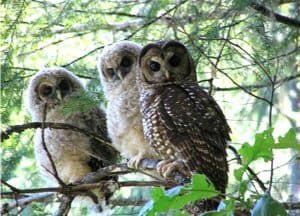 Few endangered species are better known than the spotted owl, which became the poster child of the Endangered Species Act in the late 1980’s—it was even featured on the cover of Time Magazine. The controversy surrounding the conservation of this large bird of prey was centered mainly on their need for large expanses of old-growth forests for habitat, and faced competition with human needs, including timber production. The northern spotted owl requires structurally complex forests for their nest sites. On the slopes of the Cascade Mountains, spotted owls will often use abandoned goshawk nests or mistletoe-infected branches for their roosts. In addition to specific habitat needs, spotted owls have a limited diet and require a large hunting territory. In Washington, their main food source is the northern flying squirrel. Recently, spotted owls have been experiencing habitat and resource competition from the barred owl—an invasive species that looks very similar to the spotted owl, but is much less picky about nest sites and prey, making it more ecologically successful.

The passage of the Wild Sky Wilderness Act was an important step in the continuing conservation of this iconic Northwest species, which is still experiencing population declines. Unfortunately, competition from barred owls is a difficult and complicated threat to combat, but ensuring that spotted owls have large expanses of old-growth forest like those found in the Wild Sky Wilderness is the best thing we can do for these threatened owls. Two of the major threats facing the owl include habitat loss from clear-cut timber harvest and housing developments.  Fortunately, important spotted owl habitat in Washington is protected from development and logging by federal Wilderness designation.

By supporting WW you will not only be helping to protect our wild lands and waters but also the wildlife that depend on them.