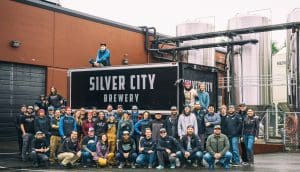 Sitting in Silver City Brewery’s Bremerton Taproom on a Friday afternoon, there is an immediate sense of community. It’s clear that almost everyone is a regular as the staff greet folks by name.  This sense of community expands beyond the Kitsap Peninsula, where Silver City has two locations — the Bremerton Taproom and their flagship Restaurant and Alehouse in Silverdale.

In 2021, Silver City launched their “Silver Linings Series.” These limited-edition canned releases are crafted to bring awareness and generate funds for charitable organizations in the community, supporting causes their team is passionate about.

This passion for community and an enthusiasm for conservation led Silver City to join the Washington Brewshed® Alliance in 2021. Soon after, Silver City suggested brewing a collaboration beer as part of their Silver Linings series to support Washington Wild’s efforts to protect wildlands and waterways in Washington State. In February 2022, Silver City released WA Wild Cold IPA, a bright, crisp, and refreshing beverage brewed with Cascade hops for that classic PNW pine character, along with Motueka hops, which impart a unique tropical lime aroma and flavor.

“As a brewery located on the Kitsap Peninsula between the edge of the Puget Sound and the base of the Olympic Mountains, we are reminded every day of the natural beauty and bounty that is iconic to Washington State. Brewing WA Wild Cold IPA to support Washington Wild’s efforts to conserve our watersheds and surrounding forested ecosystems was a no brainer for us,” said Dan Frantz, Marketing Manager

In addition to supporting Washington Wild through a Silver Linings beer, Silver City Brewery has consistently added their name to several comment letters regarding conservation issues that Washington Wild is leading including supporting salmon restoration in the Snake River, funding for Legacy Roads and Trails, and advocating for the Wild Olympics legislation.