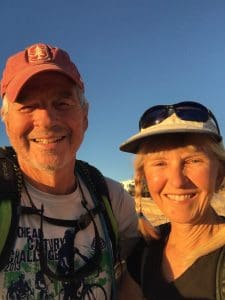 Bruce Williams was born in Seattle and has checked pretty much every adventure box you can think of. As a kid, his family, sailed, hiked, skied and backpacked all over the state. As their passion for the outdoors grew, so did their appetite for adventure, culminating with all four teenagers climbing Mt Rainier with their dad, Walter Williams. Now in his 60s, the adventures continue, as well as the commitment to protecting Washington’s wild places.

Gro Buer took a different path to the great Pacific Northwest. Originally from Norway, where the outdoors reigns supreme, her parents were sailors, skiers, and hikers. They spent most of their spare time outdoors as well as traveling all throughout the west after they immigrated to the US.

“I fell in love with Washington after high school and spent the next 35 years climbing mountains, hiking, skiing, kayaking, and backpacking when we weren’t working,” said Gro. “We now live in Leavenworth where we are closer to all the places we love as well as enjoy protecting and advocating for.”

Between the two of them, they are on three boards that protect the environment and promote interactive conservation education: The Wenatchee River Institute, The Chelan Douglas Land Trust, and a newer organization, The Friends of Leavenworth.

“We believe that being involved with our community and advocating for conservation and preservation of lands is a fundamental citizen responsibility, which is why we support organizations such as Washington Wild.”

It’s now been over 20 years of support from these two incredible people, which began with an interesting introduction to our work. “We originally heard about Washington Wild on a Sierra Club trip to Cuba, where a Washington Wild board member was part of the group and filled us in on your organization. Ever since that trip, we have added Washington Wild to our quarterly donation list.”

Thank you, Gro and Bruce for your ongoing support!