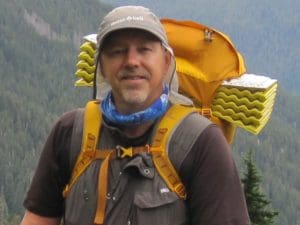 With roots originally from Lake Sunapee, NH, Bret grew up hiking in the woods, fishing, and camping on the beach. His grandparents were the caretakers of Soo-Nipi Lodge, a 400-acre lake resort. It was a defining moment for Bret when the hotel was torn down, the property sold, and access to that outdoor space lost. He knew that not only being in the great outdoors, but having access to those special places was extremely important.

Years later, Bret carried his passion for the outdoors and the tourism industry to the Pacific Northwest. Bret and his wife, Trisha, have built their own hospitality company, operating two hotels and a restaurant near Olympic National Park and Olympic National Forest.  As a local business owner, he understands the importance of protecting public lands from a conservation perspective and from an economic perspective.

Olympic Peninsula businesses rely on intact forests that provide clean water and quality fish habitat—and the tourism industry relies on recreation opportunities, such as hiking, kayaking, paddling, fishing, and camping. Bret is one of more than 700 local endorsers of the balanced Wild Olympics proposal, which would protect these ecological and recreation values, while not impacting timber jobs on the Olympic Peninsula.

“Washington Wild understands the power of a big tent philosophy comprised of diverse local support for the protection of wild places like the Wild Olympics,” said Bret, one of the local business endorsers of the Wild Olympics proposal. “As the owner of a leading business in Sequim, I understand that these natural resources and stunning landscapes are an important community asset and should be protected.”

Bret has been a strong supporter of Washington Wild for many years and he also serves on the Board of Washington’s National Park Fund. When not at work, you can usually find Bret and Trisha backpacking in one of the incredible outdoor spaces that have been protected thanks to groups like Washington Wild.

Bret Wirta is the owner of Holiday Inn and Conference Center, Quality Inn and Suites, and Black Bear Diner in Sequim, WA.