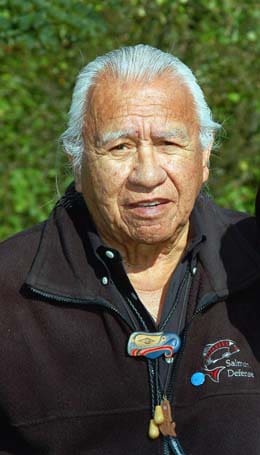 House Bill 1372 seeks to honor Billy Frank Jr. and his incredible legacy by paying tribute with a statue in the national statuary hall collection. Born in 1931, Billy Frank Jr. lived a life dedicated to protecting endangered salmon and the treaty rights of Washington state tribes and tribal members. He organized “fish-ins” and other demonstrations to reassert the tribal fishing rights reserved in the treaties. These events eventually led to what is known as “The Boldt Decision” in the United States v. Washington, a 1974 federal court case that reaffirmed tribal rights to harvest salmon and steelhead and established treaty tribes as comanagers of Washington fisheries.

Billy Frank Jr. served as Chair of the Northwest Indian Fisheries Commission for 30 years and received a number of awards, including the Common Cause Award for Human Rights Efforts, the Albert Schweitzer Prize for Humanitarianism, the American Indian Distinguished Service Award, the 2006 Wallace Stegner Award, and the Washington State Environmental Excellence Award, and a posthumous Presidential Medal of Freedom from President Barack Obama.

He is a figure that united many different organizations in pursuit of protecting our natural resources and educating all about the unique relationship that our local tribes have with the land and water. As he once put it so eloquently:

“I don’t believe in magic. I believe in the sun and the stars, the water, the tides, the floods, the owls, the hawks flying, the river running, the wind talking. They’re measurements. They tell us how healthy things are. How healthy we are. Because we and they are the same. That’s what I believe in.”

In recognition of the shared interest in our wild places and wildlife, Washington Wild’s board of directors passed a tribal resolution in 2019 supporting a better understanding of tribal treaty rights and tribal lifeways to guide and enhance our work and conservation efforts. We look forward to continuing to explore the common ground around protecting our natural resources and wild places and sharing the story of tribal rights and lifeways.