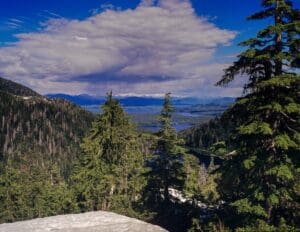 The Tongass National Forest is the largest remaining intact temperate rainforest in the world. Nearly 17 million acres in size and home to over 400 species of wildlife, it’s also one of the rarest ecosystems in the world.
The proposed management plan would override the 2001 National Roadless Rule and open vast tracts of the Tongass to logging and road building. Freshwater, healthy salmon, one-of-a-kind recreation, and climate change offset are just a few reasons why protecting the Roadless Rule matters.
As “America’s Climate Forest,” the Tongass stores more climate-disrupting pollution in its old growth forests and rich soils than any other national forest in the United States. Logging and roadbuilding will release the stored carbon into the atmosphere at a time when we need to be cutting our emissions drastically to prevent full blown climate chaos.
Indigenous communities are at risk of having salmon supply and other ways of life be disrupted. Nine Tribal Governments, in collaboration with the Tribes of Southeast Alaska, recently filed an APA petition to create a Traditional Homelands Conservation Rule that protects the traditional and customary uses and areas of the Tlingit, Haida, and Tsimshian peoples in the Tongass National Forest.
The Tongass is our backyard, at just 500 miles from Washington’s northern border. We share business, economic, and cultural connections. Washington Wild and the 72 undersigned are standing up for the Tongass because as federally owned public land, it’s entrusted to all of us — the decisions made today on its Roadless Areas today affect us all tomorrow.