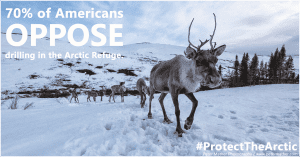 70% of Americans oppose oil and gas drilling in the Arctic, one of our greatest remaining wild places. In 2017, a provision in the Tax Cuts and Jobs Act mandated two oil and gas lease sales for the coastal plain of the Arctic Refuge. While the first sale failed, without congressional action, a second sale is mandated.

We need to restore protections to prevent the shortsighted destruction of this treasured place.

The Gwich’in people call the coastal plain “The Sacred Place Where Life Begins” and have relied for thousands of years on the Porcupine caribou that use it as their calving and nursery grounds. Oil and gas development threatens to alter the caribou migration and population and destroy the coastal plain’s natural values, risking the way of life of the Gwich’in and other Indigenous peoples.

The Arctic is warming three times as fast as the global average, making it ground zero for climate change. Proposed oil development on the coastal plain would produce an estimated 10 billion barrels of oil, an amount that threatens to release a carbon bomb of 4.3 billion metric tons of carbon dioxide equivalent into the atmosphere.

We need legislation that protects intact ecosystems, not oil and gas development that poses serious biological, cultural, and climate threats.

With a second lease sale mandated under the 2017 Tax Act, legislative action must be taken this Congress to prevent a second sale and restore protections for the coastal plain of the Arctic Refuge. Shielding the coastal plain from oil and gas development has long been one of the highest-profile conservation issues in the United States — we need to protect this irreplaceable land, now more than ever.