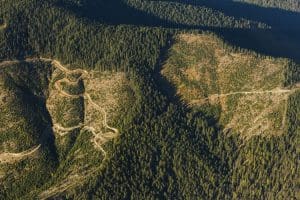 Aerial view over Plum Creek / Checkerboard Forest lands along the I-90 corridor. The Nature Conservancy acquired the lands from the Plum Creek Timber Company, including lands in the eastern Cascade Mountain Range of Washington and in the Blackfoot River Valley in Montana to conserve the forestland to protect clean water, forests, and wildlife habitat for people and wildlife. Photo credit: © Benjamin Drummond

This project would protect 12,000 acres of private  checkerboard forestlands in the Taneum watershed in Kittitas county.  The total funding need is $14.5 million, yet President Biden’s FY2023 budget only  provides $6.5 million for the project. To fill the $8 million funding gap, the Nature Conservancy has submitted a congressionally designated spending request, also known as an earmark, for the project.

In 2020, the Great American Outdoors Act passed and doubled the amount of funding for the Land and Water Conservation Fund. While this was a huge victory, unfortunately here in Washington, we have not seen a commensurate increase in funding for Washington based LWCF projects. In fact, Washington state received less than 1% of total project funding in 2021.

The Washington Cascades Yakima River Watershed project is the last major checkerboard project in the I-90 corridor. Protecting these lands will build on the legacy of the Cascades Conservation Partnership and offer an opportunity to leverage the benefits of the Great American Outdoors Act here in Washington.