Mourning the Passage of a True Leader 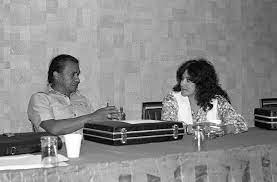 Washington Wild mourns the passing of tribal warrior Lorraine Loomis of the Swinomish Nation, who died Tuesday, August 10, at the age of 81. She had chaired the Northwest Indian Fisheries Commission since 2014, succeeding the late Billy Frank, Jr.

To say she was an advocate for salmon and other fish and wildlife would be an understatement, according to Washington Wild board member Steve Robinson, who worked under her leadership for 26 years.

“This was a woman who rose from a fish processor job shortly after the 1974 U.S. v. Washington (Boldt) Decision to be one of the greatest tribal natural resource leaders of all time,” said Robinson. “She was tireless, courageous, and more than dedicated to the task.”

Upon her passing, U.S. Senators Patty Murray and Maria Cantwell urged people to carry on her legacy, calling Loomis a strong and passionate leader who spent four decades fighting for the Swinomish and other tribes, protecting treaty rights and preserving salmon populations for future generations. Washington Governor Jay Inslee praised Loomis’ longtime leadership, saying “Washington is a little less bright without her.”

In Washington Wild’s Fall 2018 newsletter, Loomis contributed the following quote to an article about traditions rooted in our public lands:

“My Tribe, the Swinomish Indian Tribal Community, holds a First Salmon Ceremony and Blessing of the Fleet in May each year. We welcome the salmon home with drums, songs and prayers. Because salmon binds us all together as communities, we invite our neighbors to share this food that has sustained us for so many years. We honor the First Salmon by returning its remains to the water and we pray for the protection of our fishermen and their boats. Salmon is food for our bodies and our spirits. For us, salmon is not optional. It is essential.”

Loomis was educated at La Conner High School and Skagit Valley College. She served as a member of the Swinomish Senate from 1985 to 2000. She was Fisheries Manager for her tribe for many years and was integrally involved in a host of landmark projects and programs dedicated to the survival of salmon and other resources, to the benefit of both tribal and non-tribal people. She was a keen negotiator and led the North of Falcon salmon fisheries planning process for tribes, in co-management with the state of Washington. She was also a dynamic proponent of the U.S./Canada Pacific Salmon Treaty and served ably on the Fraser River Panel that manages sockeye and pink salmon.

Robinson added, “She was key to the development and implementation of vitally important natural resource management processes, and kept the protection and restoration of critical habitat at the forefront of those efforts. It seems like yesterday that she adamantly stated in meetings of fisheries and environmental managers, ‘it’s the habitat stupid!”

She received many awards over her lifetime but perhaps the one that meant the most was the Billy Frank Jr. Leadership Award she received in October for her decades of work defending treaty fishing rights.

Loomis is survived by daughter Kim Murphy of Anacortes; sons John Grossglass and Jim Grossglass; her brothers Marvin Wilbur and Vince Wilbur and former husband Ron Loomis, all of Swinomish, as well as numerous other nieces, nephews, grandchildren, and great-grandchildren.