Today, Washington Wild staff joined the Global Climate Strike in both Seattle and Tacoma to show solidarity with youth around the world who are fighting for their future. The voices of young climate activists like Greta Thunberg, Isra Hirsi, Autumn Peltier, and many others has transformed conversations about the climate crisis and is mobilizing both the public and international governments to take action. Washington Wild is a proud ally in supporting a healthy future for our young people and is working to meaningfully engage all ages in advocating for our wild lands and waters.

In Tacoma, youth from Sunrise Movement Washington kicked off a rally at People’s Park. Environmental equity and justice were major themes on protest signs, as participants marched to Tacoma City Hall to demand stronger policies to combat the climate crisis, including the immediate halt to construction of the Tacoma LNG storage facility. We heard testimony from Protectors of the Salish Sea, an indigenous-led movement to ban new fossil fuel infrastructure in our region, on the importance of working together and respecting indigenous land and sovereignty.

In Seattle, the day started at Cal Anderson Park with Climate Justice Fest, where attendees could create signs, attend workshops, join sing-alongs, try screen printing, and more. Marchers then headed for City Hall, joining with Amazon Employees for Climate Justice along the way. Early estimates put the crowd at over 10,000 people. At the rally outside City Hall, youth leaders, electeds, climate justice organizations, and others spoke to the thousands gathered there about the need for leadership and urgent action from City leadership. Youth from Sunrise Movement Washington and songwriters from The People’s Echo closed the event out in song.

“We’re together braver not than ever. We’ve got one chance this is now or never.” 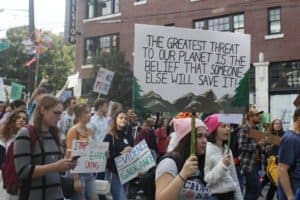 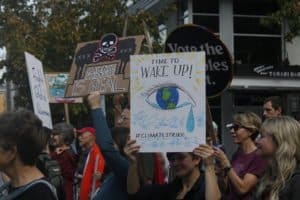 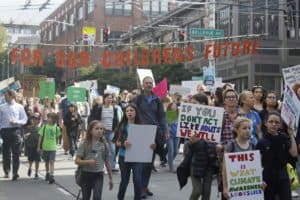