The three awards presented — the Conservation Voices Award, Karen M. Fant Founder’s Award, and the Brewshed® Alliance Award — honor community members who have played an invaluable role in advancing conservation efforts over the past year. 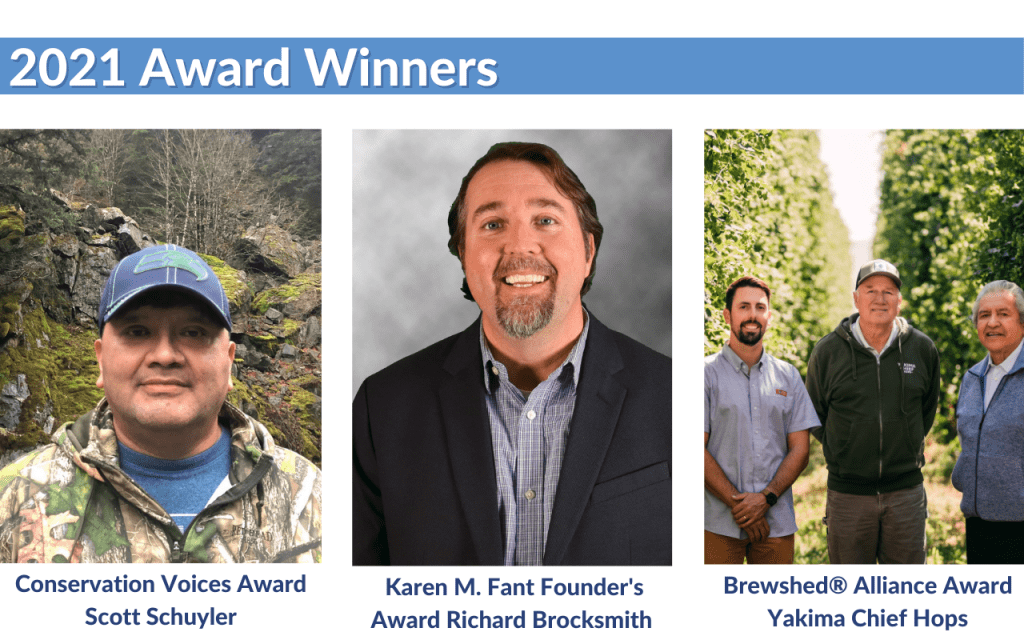 The Conservation Voices Award is given each year to an individual who has lent their voice as a compelling messenger in support of protecting Washington’s wild lands and waters. This year’s award will be presented to Scott Schuyler, Natural Resources Policy Representative for the Upper Skagit Tribe.

As a lifelong fisherman and tribal elder, Scott has worked with Washington Wild to protect wild lands and waters in the Skagit River Basin. His advocacy has included publishing an OpEd in the Everett Herald (“Commentary: Mining Method Sucks the Life from Salmon Streams”), drafting a letter from the Upper Skagit Tribe to oppose a pending mining permit in the Skagit Headwaters, and working to identify protections for wild rivers in the Skagit Watershed and North Cascades.

“I’m proud and honored to be recognized by Washington Wild for carrying on the work that our ancestors started thousands of years ago while protecting all that is important to us,” said Scott Schuyler, Natural Resources Policy Representative for the Upper Skagit Tribe. “The salmon are the centerpiece of our culture. Our people need to continue to fish. We need to make sure that the runs here are sustainable.”

The Karen M. Fant Founder’s Award is given each year to an individual that has distinguished themselves through their efforts to protect wild places in Washington State through activism and organizing. This year’s award will be presented to Skagit County resident, Richard Brocksmith.

As a valued member of the Skagit Headwaters Coalition, coordinated by Washington Wild, Richard made a significant impact in 2021 by spearheading the coalition’s effort to reach out to water purveyors, municipal governments, and land use authorities in Skagit County to oppose the pending mining permit in the Skagit Headwaters and urge permanent conservation of the upper watershed. He volunteered his time to successfully recruit 12 new resolutions and a letter from governments including the Skagit County Board of Commissioners, Skagit Public Utility District, Port of Skagit, Samish Tribe, Skagit Council of Governments, and the cities of Anacortes, Mount Vernon, Burlington, Sedro Wooley, Concrete, Hamilton and La Connor. His efforts are summarized in a report entitled, “Skagit Local Governments and Land Use Agencies Say No to Mining in Skagit Headwaters” (June 2021).

“It has been a pleasure to work with Washington Wild and the diverse coalition they have led for more than two years to oppose mining in the Skagit headwaters,” said Richard Brocksmith who serves as Executive Director of the Skagit Watershed Council and as a Mount Vernon City Councilmember. “It is notable that nearly all local and tribal government have come together to speak with one voice in opposition to this existential threat to our future for the first time since the Magic Skagit arose to fight against nuclear power plants in our valley half a century ago.”

The Washington Wild Brewshed® Award will be presented to Yakima Chief Hops for their commitment to protecting clean water at its source for fish, wildlife, drinking water and quality craft beer.

Yakima Chief Hops joined the Washington Brewshed® Alliance in 2019 and became a particularly strong member during the pandemic. Located in “Hop Country, USA” Yakima Chief Hops (YCH) is one of the largest hop producers on the planet. As a 100% grower-owned network of family hops farms, YCH provides high-quality hops to breweries around the state and across the globe. Accepting the award on behalf of Yakima Chief Hops is Levi Wyatt, the Corporate Social Responsibility Coordinator at YCH.

“We are firm believers that healthy hops require clean water and want to ensure this resource is managed effectively to continue supplying the world with quality hops,” said Levi Wyatt, Corporate Social Responsibility Coordinator for Yakima Chief Hops, “Our ‘Hops N Water’ virtual event with Washington Wild was a great way to share our sustainable water practices as a complement to their ‘Clean Water for All’ campaign.”