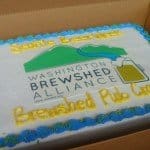 Beer lovers and wilderness fans alike turned out for the “crawl” through the breweries of our Ballard Brewshed® Partners. Participants ranged from out-of-towners who were happy to get a walking tour the Seattle brewery scene, to beer aficionados and aspiring brewers such as those from Flying Lion Brewing Company opening this summer in Columbia City, to longstanding successful pioneers of the local brewing industry in the state, such as Mike Hale of Hale’s Ales.

Others, like Evan Escamilla, saw the opportunity as a trifecta of fun: support a good cause, drink beer with good friends and celebrate a birthday! (This definitely called for cake.)

He said, “For myself and many of my friends, [the pub crawl] was our first exposure to the organization. I’m hopeful that some will remain active and consider donating or participating in a Brewshed® pub crawl again in the future. Thank you for being a great cause.”

We started at Peddler Brewing Company with discounts and cake.  Then we moved to NW Peaks Brewing where owner Kevin Klein created a specialty brew in honor of Washington Wild, and we ended at Reuben’s Brews where some crawlers shut the place down.

All three breweries have been enthusiastic supporters of Washington Wild’s efforts to educate the public on the direct link between the protection of Washington’s water sources and the protection of the state’s high quality beer.  Haley Woods of Peddler Brewing Company recorded a testimonial this month that summarized the valuable partnership between Washington Wild and Peddler that ran on the Seattle-based radio station KEXP.

If you missed the pub crawl in May, you can more than make up for it by attending Washington Wild’s Brewshed® Beer Festival on Thursday, July 31, at Hales Ales in Fremont. With our Brewshed® Alliance brewery partners pouring at the event, this is an event for beer lovers that is not to be missed, so get your tickets today! We will have a raffle and other surprises to come.  To make sure you don’t miss out on any of the upcoming Brewshed events, sign up to receive the monthly update. Email Lyndsay Gordon at Lyndsay@wawild.org. 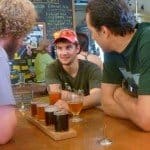 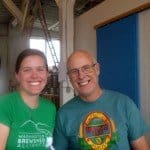 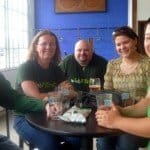 Crawlers enjoying a beer at Peddler! 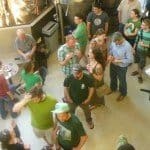 The crowd ends the evening at Reuben’s Brews.