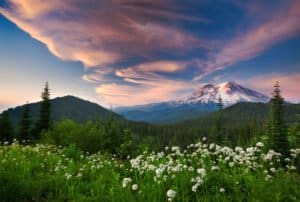 The National Park Service is working on Air Tour Management Plans for 24 parks and has chosen two of Washington’s most beloved parks – Rainier and Olympic National Parks – as part of a group of four to focus on first. Both Parks feature more than 90% of their area protected as federally designated Wilderness supporting quiet recreation and opportunities for solitude.

Mount Rainier National Park is the tallest peak in Washington State and Olympic National Park is home to the largest temperate rainforest in the United States outside of Alaska and the quietest spot in the lower 48 States. Both parks are home to threatened and endangered species, including the marbled murrelets and northern spotted owls, who are likely to be disrupted by loud noises generated by commercial air tours. 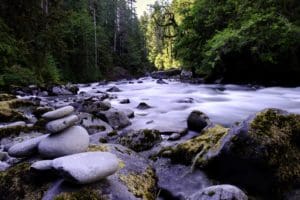 Low-level airspace is where the most impact to wildlife, visitor experience, and wilderness values is likely to occur. By keeping commercial air tours above or outside immediate air space, such impacts could be minimized while still providing scenic views to these spectacular parks — but such impacts have not been assessed.

Without an assessment of the impact on wildlife, park resources, or visitor experiences, the current draft Air Tour Management Plans fail to uphold the 1916 National Park Service Organic Act, which ensures the conservation and enjoyment of the natural scenery and wildlife of our national parks.  Further, it is unclear if the current Air Tour Management Plans are in compliance with the National Environmental Policy Act (NEPA). National Park Service Staff has indicated that the plans are moving forward under a categorical exemption, which exempts the Air Tour Management Plans from analysis or consideration of alternatives, cumulative impacts analysis and environmental impacts to endangered species, wilderness character, and other resources and uses of the park.

The 28 undersigned organizations and members call upon the National Park Service and Federal Aviation Administration to take a closer look at more options to protect the resources and experience of Mount Rainier and Olympic national parks, including a “no air tour” option, and to preserve and restore the natural sounds and quiet of these nationally significant wilderness landscapes as much as possible.