The event featured guest speakers who were intimately involved in the development and implementation of the legislation. We brought together the people who helped make this happen to tell their stories, including our congressional champions, business leaders, local elected officials, and conservation and recreation leaders.

Each guest speaker shared a few anecdotes about the process and effort with the 60 attendees. We heard form Congresswoman Suzan DelBene who shared her excitement of being able to help lead this proposal to final bill passage after taking over the first Congressional district. We also heard form Matt Larson, the mayor of the City of Snoqualmie, talk about how important protecting his “backyard” was for his constituents.  Additionally, we heard from former Evergreen Mountain Bike Alliance Executive Director Glenn Glover speak to how mountain bikers and Wilderness advocates were able to build trust and find common ground in support of Wilderness designations around this proposal that has eluded organizations in other states. 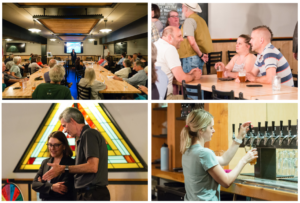 Washington Wild’s Brewshed® Alliance is a partnership between over 60 Washington State breweries and Washington Wild, designed to highlight the overlapping interests between the conservation and brewing communities. We work with Brewshed Partners throughout the state to co-host events helping raise both funds and awareness for Washington Wild’s statewide conservation work, and share the common goal of protecting wild lands and waters leading to superior downstream beer. Our partners have played a critical role in reaching thousands of supporters and consistently raising over $25,000 of annual unrestricted funding to support our work.