Today, a coalition of breweries across Washington state joined together to stand up for healthy watersheds after the Trump Administration announced they are moving forward with a controversial proposal to eliminate long-standing protections for old-growth forests in Alaska’s Tongass National Forest. A letter signed by 39 brewing industry businesses was the latest evidence of opposition to the new proposal, aimed to weaken roadless area protections.

“Breweries, brewpubs, and maltsters understand the incredible value in protecting our national forests as sources for clean water. Water is the number one ingredient in beer, a growing economic force here in Washington” said Laura Buckmaster, Program Manager at Washington Wild, who coordinates the Washington Brewshed® Alliance. “Protecting the Roadless Rule and the Tongass National Forest ultimately means protecting clean and safe drinking water which turns into the downstream beer we enjoy.”

Local media attention on this issue in Washington news outlets has been growing, including recent opinion pieces in The Seattle Times, The Everett Herald, and The Spokesman-Review. While Alaska’s Tongass National Forest is the first target for repeals of these hard-fought forest protections, many in Washington fear that, if successful, it will not be the last.

The U.S. Forest Service published a draft environmental assessment that highlighted the most extreme of six options (full elimination of roadless areas protections) as the preferred alternative before asking for public comment on the plan. Despite the fact that the Tongass National Forest is federally owned and managed for all Americans, not a single public meeting was scheduled outside Alaska or Washington D.C. A group of conservation and recreation organizations joined Senator Maria Cantwell (D-WA) to hold a community public meeting at the Seattle REI flagship store on November 23 to offer local stakeholders, including Fremont Brewing, an opportunity to weigh in on old-growth protections on our national forests. More than 100 people attended the meeting and more than 25 gave oral public comments.

“Mainstem Malt connects conservation-minded family farms to brewers and distillers seeking change. Our work focuses on farmland, but at the end of the day, we all benefit from the clean water, habitat, and biodiversity offered by the world’s last wild places” says Phil Neumann, Co-Founder & CEO of Mainstem Malt in Walla Walla. “Let’s leave the Roadless Rule intact and lean into sustainable agricultural opportunities for our rural communities.”

Many of those who signed on are members of the Washington Brewshed® Alliance, a program designed to help the brewing industry advocate for clean water initiatives. Over the past eight years, over 60 businesses across Washington state have joined the Alliance to help raise funds and awareness for the conservation of healthy watersheds.

The Washington craft brewing economy accounts for $9 billion annually and employs over 6,000 people. Washington also produces 75% of our nation’s hops, contributing greatly to the national beer economy of $328 billion. In many cases, the source of municipal water stems from headwaters located in national forest roadless areas, the same ones that would be affected if the Roadless Rule was eliminated.

“You must have good quality water to make good quality beer,” said Pam Brulotte, President of the Washington Brewer’s Guild and co-founder of Icicle Brewing Co. in Leavenworth, Washington. “Being a small and independent craft brewer, we’re reliant on producing a quality consistent product so locally we try and do a lot to keep our river clean and pure.”

Over the last year, the Mt. Baker-Snoqualmie National Forest has already greenlighted two projects that allow new road building in inventoried roadless areas, the Olivine Mine and Excelsior Mine Expansions. Continuing to allow roadbuilding in roadless areas and allowing statewide exemptions sets a dangerous precedent for the future management of the Forest and in Roadless Areas. This puts small business owners who rely on clean water, value water security, and value great tasting beer at risk. 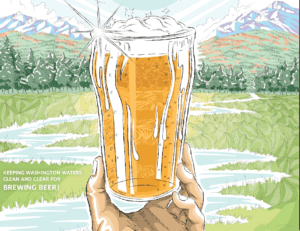