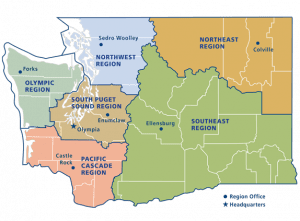 “This summer is smashing all our records and leaving the state bone dry, leaving eastern Washington to face an ongoing, tremendous risk of wildfire,” said Commissioner of Public Lands Hilary Franz, the elected official who oversees DNR. “Over the past year and a half, we have been reminded just how important our public lands are, so closing them is not a decision we take lightly. But with the drought leaving the region as dry as ever we must do all that we can to prevent human-caused fires.

DNR joins the Umatilla National Forest and the Confederated Tribes of the Colville Reservation in closing lands in eastern Washington to public access. Recreational closure is only made in the most serious of circumstances, but with no meaningful precipitation forecasted and fire ignitions already double the ten-year average by late July, the decision is warranted.

DNR has already issued a burn ban in effect until at least September 30.

Read the release from DNR for full details.