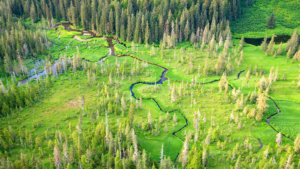 In a bold move for a region long reliant on felled old-growth trees, the Biden administration announced a new plan for the Tongass National Forest to restore and implement additional safeguards. Not only will the previous Roadless Rule protections be reinstated (as promised in June) but new safeguards will be added, including $25 million in federal spending on local sustainable development and an end to large-scale logging of old growth timber across the forest’s entire 16 million acres.

The decision comes as a reversal of the Trump Administration’s biggest decisions regarding public lands. It also marks a halting of significant future carbon emissions. The Tongass — and similar old-growth forests here in Washington — act as “carbon sinks.” Many of the old-growth trees in the Tongass are at least three centuries old and absorb at least 8 percent of the carbon stored in the entire lower 48 states’ forests combined.  That makes the Tongass one of our best tools in the global fight against climate change.

Regarding the administration’s decision, Agricultural Secretary Tom Vilsack said it’s time for the region to divest from logging and invest in economic activities like fishing, recreation, and tourism.  The Washington Post reports:

Under the proposed plan, Alaska Native Tribes will be able to harvest old-growth trees on a small scale for community and cultural uses, such as totem poles, canoes, and weaving.

Washington Wild has been leading efforts locally to re-instate the Roadless Rule in the Tongass — from comment letters sent to elected officials, to action alerts, to public meetings — because we know the previous administration’s rollback of protections is a threat to our last remaining ancient forests everywhere, including in Washington.

In Washington state, we have some of the best Roadless areas in the country – places like South Quinault Ridge, much of the Kettle Range, Mt. Baker and The Dark Divide. Decisions made regarding the Tongass signal what could be next for these special places.

We’re thrilled at this bold proposal. It’s time to protect this special place for good.