Movement in Congress on Omnibus Spending Package Means Real Potential for Wild Olympics Bill to Pass—But We Must Keep Up the Momentum! 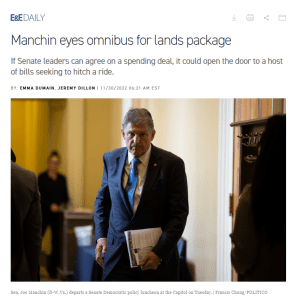 From the article: “Lawmakers have long eyed a package of bills establishing new public land designations and protections. But time is running out and the fate of an omnibus spending bill is still up in the air. Still, there were glimmers of hope Tuesday. The top four leaders on Capitol Hill met with President Joe Biden at the White House and emerged saying that reaching consensus on an omnibus spending bill remained a distinct possibility.”

As one of the founding members of the Wild Olympics Campaign, Washington Wild sees a future where we provide durable, permanent safeguards for the Peninsula’s most priceless natural treasures. Since 2009, we have been working closely with our partners, stakeholders, and legislators to craft a carefully balanced Wild Olympics bill.

After its reintroduction by Rep. Kilmer and Sen. Murray in 2019, and bipartisan support earlier this year to include it in a package of public lands legislation, we finally have a real chance to see Wild Olympics move out of Congress and onto President Biden’s desk.

Several of you have already sent letters urging Senators Murray and Cantwell to keep fighting—thank you for your advocacy!—but we must keep up the momentum!

If you haven’t already, please take a few moments to take action today. This is an exceptional opportunity to preserve these wild, unique, and beautiful places as a natural legacy for future generations.

If passed, the Wild Olympics would designate the first new wilderness areas in Olympic National Forest in three decades, and the first-ever Wild & Scenic River designations. It would permanently preserve ancient and mature forests, critical salmon habitat, and sources of clean drinking water for local communities, while also protecting and expanding world-class outdoor recreation opportunities like hiking, camping, boating, hunting, and fishing. No roads would be closed, and trailhead access would not be affected. It also has widespread support. More than 12,000 Peninsula residents have written letters or signed our petition, and more than 800 Peninsula & Hood Canal area-businesses, farms, faith leaders, sportsmen groups, elected officials, conservation, outdoor recreation and civic groups have endorsed Wild Olympics. 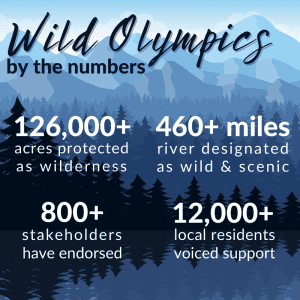 From the start, Senators Murray and Cantwell have been steadfast environmental champions and proponents of the bill. We need your help to thank our senators for their continued leadership and urge them to continue to fight for Wild Olympics. We want to see Wild Olympics included in any legislative packages that develop before the end of the current Congressional session. After years of collaboration, grassroots organizing, community building, and outreach, this is the legislative opportunity we have been working towards and hoping for.

We need your help to thank Senators Murray and Cantwell for their leadership & urge them to ensure Wild Olympics is included in any legislative packages that develop before the end of the current Congressional session!