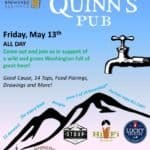 Have a beer & make an impact by supporting Washington Wild on #GiveBIG at a Brewshed® Happy Hour near you! Washington Wild is joining thousands of nonprofits raising money to help improve our local community on May 3, 2016. This is our moment to work and give together – donations large and small – making […] 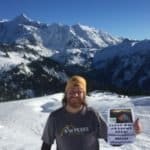 Join Washington Wild in Creating a Big Tent for Conservation this#GivingTuesday during a Brewshed® Happy Hour near you! Over the past year, Washington Wild made over 1,000 connections with local elected officials, business owners, recreation organizations and sportsmen to support the permanent protection of wild lands and waters throughout the state. Be a #WildernessAdvocate this […]

Join Washington Wild’s Brewshed® Alliance in celebrating the connection between protected water and better downstream beer with one of our first partners, NW Peaks Brewery! This event will be held at The Bergschrund and we are so excited to have our first happy hour in their great new space. NW Peaks Brewery is named after our […]

Join us for a Brewshed® Happy Hour and help us to honor Peddler Brewing Company for earning the  Brewshed Partner award from Washington Wild in 2014.  Every year Washington Wild chooses a partner that has helped our conservation move forward in a major way throughout the year and in 2014 that award went to Brewshed® Partners […]