Re-Release of the Alpine Lakes Pale 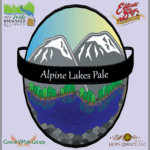 The Alpine Lakes Pale: Drinking in the Success

By: Lyndsay Gordon, Washington Wild Brewshed® Alliance Program Manager On February 19, as guests walked into Elliott Bay Brewing Company’s Lake City Way location, they noticed something different. Celebratory voices carried up the stairs from the Cascade Room below. Downstairs, a party was well underway to celebrate a major Wilderness victory: passage of the Alpine Lakes […] 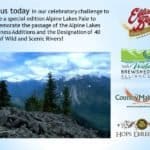 After seven years of hard work, the Alpine Lakes Wilderness Additions and Pratt and Middle Fork of the Snoqualmie Rivers Protection Act passed Congress!  This legislation will protect over 22,000 acres of Wilderness and almost 40 miles Wild and Scenic Rivers.  As a result clean water, native trout, world-class outdoor recreation opportunities, and downstream beer will all be […]