Today, 142 conservation, recreation and wildlife organizations, faith leaders, outdoor industry companies and other stakeholders around Washington sent a letter to members of the Washington State Legislature calling for common sense reform of the practice of motorized suction dredge mining on rivers and streams statewide. The letter represents a 70 percent increase from a similar letter sent to legislators at the start of last year’s legislative session a year ago.

“From Walla Walla to Bellingham and Longview to Spokane Valley a diverse group of stakeholders have come together like few times before by demanding motorized suction dredge mining reform in Washington State,” said Tom Uniack, Executive Director for Washington Wild, who coordinated the stakeholder sign-on letter which was sent to each member of the State Legislature. “The support for this reform is peaking and the time is now to pass this bill to protect our collective decades-long investment in salmon recovery.”

At issue is that Washington’s current regulations allow motorized suction dredge mining in virtually all waterways and Pacific coastal beaches, including those designated as Critical Habitat under the Endangered Species Act (ESA), without requiring permits or monitoring.  This activity is occurring largely unchecked in Critical Habitat for Chinook salmon, the primary food source for our struggling Southern Resident Killer Whale population.

Proven impacts of unregulated suction dredge mining include erosion and sedimentation, mobilization of mercury and other heavy metals, increase in water temperatures, contamination, habitat destruction, as well as physical impacts to fish eggs, juvenile fish, invertebrates, and other aquatic organisms.

“Trout Unlimited is dedicated to the conservation and restoration of Washington’s salmon and steelhead populations, and all the hard work we are doing in the Central Cascades and across the state is being undermined by inadequate regulation of suction dredge mining,” said Pat from Pat Hesselgesser, Trout Unlimited’s Washington Advocacy Chair and member of the Yakima Headwaters Chapter of Trout Unlimited which signed the letter. “Now is the time for addressing this issue head-on and instituting meaningful legal reforms to improve protections for these struggling fish populations.”

This legislation has received critical backing and support from many Native American tribes across Washington State, including the Snoqualmie Tribe, Yakama Nation, Sauk-Suiattle Tribe, and Quinault Indian Nation, to name a few. Non-profit organizations have also joined the legislators in support for the measures.

“We have spent years working to raise awareness of this outdated practice that destroys sensitive habitat to benefit a small number of hobbyist miners,” said Robert de los Angeles, Snoqualmie Tribal Chairman. “So it is extremely gratifying to see that our State leaders are listening and embracing policies that are more consistent with all of our neighboring states.”

The insufficient regulations on motorized suction mining do not comply with the Clean Water Act. In 2018, Washington’s Attorney General, Bob Ferguson, weighed-in on the effects of suction dredge mining in a 9th Circuit Court of Appeals case, which upheld Oregon’s suction dredging regulations banning motorized mining from critical habitat. The Oregon law is similar to the new bills before the Washington legislature which is focused on protecting clean water and quality fish habitat.

“As a craft beer bar, bottle shop and restaurant owner, I know the importance of toxic mineral free water,” says Ron Swarner, co-owner of Peaks and Pints and member of the Washington Brewshed Alliance. “Beer, like our bodies, is mostly water. Water is the most important ingredient in beer, too. It affects the pH of the beer. It affects how the beer flavors are expressed to one’s palate. Water can also cause off-flavors from chlorine or contaminants. Therefore, we are one of dozens of Washington businesses that support reforms that protect the source of clean water for fish and wildlife, human consumption and better tasting beer.”

Washington’s water quality and fisheries resources are critical to the state economy, amounting to $4.5 billion annually for the state of Washington. However, wild fish populations including Chinook salmon (the primary food source for our endangered southern resident killer whales) continue to decline, says the State’s recently released State of the Salmon in Watersheds report. Meanwhile, the state spends millions on recovery efforts for salmon, steelhead, and orcas.

“Leavenworth has a thriving tourist economy built on the back of our incredible landscape and natural environment in the Central Cascades,” said Jason Lundgren, Leavenworth City Council Member. “It is critical that we balance the needs of society and protection of our natural environment here in Leavenworth, or both will suffer. This is simply common-sense legislation and low-hanging fruit for protecting our ESA-listed salmon and steelhead in the Upper Columbia.” 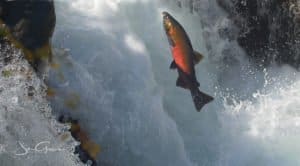 There is strong political momentum and optimism about passing reform legislation during the current abbreviated legislative session which began on January 13.