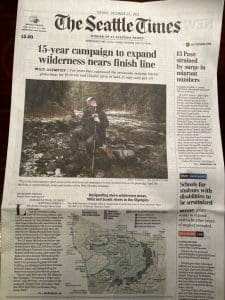 Ask the members of the 1889-90 Press Expedition, who took six months to traverse the range from north to south. Or Tim McNulty, a writer and conservationist who has lived on the Olympic Peninsula for 50 years, notching many miles underfoot in that time. He knows how hiking through these mountains can be as much of a slog as navigating the world of public lands politics.

For 15 years, McNulty and fellow conservationists have fought to get a patchwork of more than 125,000 acres of land in the Olympic National Forest designated federal wilderness areas, and nearly 500 miles of rivers deemed Wild and Scenic Rivers — permanently excluding these lands from potential logging and road building, prohibiting mechanized vehicles and tools there, and safeguarding the rivers from future hydroelectric projects.

“There’s very little smooth, flat hiking in the Olympics — everything is either up or down,” said McNulty, vice president of the nonprofit Olympic Park Advocates. “And this effort has been a particularly long, steep climb.”

Buffeted by political headwinds facing wilderness expansion and undeterred by false starts over the years, campaigners believe the finish line for the conservation proposal known as Wild Olympics has never been closer. 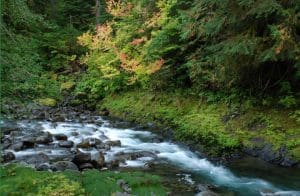 A lame duck Senate may establish several new, federally protected public lands, and Washington state conservation advocates have converged on Capitol Hill in D.C. for a final push. Reelected last month, Washington’s senior senator, Patty Murray, is now the potential chair of the Senate Appropriations Committee, and one of the most powerful people in Congress. Washington’s junior senator, Maria Cantwell, sits on the Committee on Energy and Natural Resources, where the bill received a hearing in May.

Murray — who hiked to the Upper Dungeness River with McNulty in August 2021 to see the Wild Olympics up close — and Cantwell are vocal supporters of the bill.

“Having passed the House and clearing the committee process in the Senate, Wild Olympics has made it futher in the legislative process than ever … With the increased seniority and influence of our two senators on key committees, we are as close as we have ever been to securing passage of the legislation.”

“Having passed the House and clearing the committee process in the Senate, Wild Olympics has made it further in the legislative process than ever,” said Thomas O’Keefe, Pacific Northwest stewardship director for American Whitewater, which endorsed the campaign. “With the increased seniority and influence of our two senators on key committees, we are as close as we have ever been to securing passage of this legislation.”

🚨TAKE ACTION🚨
Send a letter to Senators Murray and Cantwell thanking them for their leadership and urging them to continue to fight for Wild Olympics. The more Washingtonians who raise their voice in support, the higher of a priority Wild Olympics becomes for Congress.