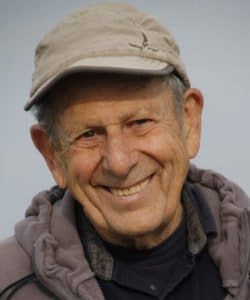 Bob is a founding member of the Wild Olympics Campaign and has worked tirelessly with Washington Wild as a member of the Wild Olympics Campaign over the last 8 years to build local support for new Wilderness and Wild & Scenic River protections on the Olympic Peninsula, especially in Clallam County.  Bob‘s past efforts supporting clean and renewable energy and his recent efforts supporting the permanent protection of wild lands and waters have distinguished him as an exceptional local advocate.

“I moved here from New Jersey more than 50 years ago and quickly fell in love with our forests,” reflects Lynette. “Being in wilderness brought me to a place I had never known – a sense of going way back in time, a touch of risk where you were not in control, yet everything worked in harmony.” He found it alarming how most locals took forests and wilderness for granted, assuming that they would always be here – despite the relentless logging and development going on. “We Jersey folks knew better, having seen what over exploitation could do. So I became a volunteer activist, and have never stopped.”

The September event was a celebration of the National Park Service Centennial and Washington’s Wilderness Legacy. Over 150 attendees enjoyed the evening and helped raise over $60,000 to support wild places. Read more about the award recipients for the evening in the WA Wild Blog.