Today, Washington Wild and a host of conservation and recreation organizations joined Senator Maria Cantwell (D-WA) to hold a community public meeting at the Seattle REI flagship store to offer local stakeholders an opportunity weigh in on old-growth protections on our national forests.

The sentiment from the crowd was palpable: Protect the largest roadless area in the country. A group of more than 100 including more than 30 who gave public testimony, voiced support for a rule that protects a third of the country’s national forests from logging and road-building. The Roadless Rule protects nearly two million acres in Washington State, including places like Liberty Bell in eastern Washington, Olympic Peninsula’s South Quinault Ridge and South Cascades’ Dark Divide. 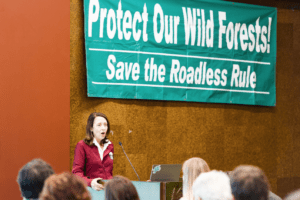 Last month, the Trump Administration announced a controversial proposal to eliminate long standing protections for unlogged old-growth forests within Alaska’s Tongass National Forest. The ancient forests are part of the last remaining intact temperate rainforest on the planet and are champions of absorbing harmful greenhouse gasses out of the atmosphere.

“The Trump Administration is moving forward with an extreme proposal to eliminate hard-fought and long-lived roadless forest protections without any public meetings outside Washington D.C. and Alaska,” said Tom Uniack, Executive Director of Washington Wild. “This public meeting in Seattle was an opportunity to highlight diverse voices in support of roadless areas in Alaska and around the country.”

The roadless rule is a regulation established in 2001 and which protects more than 58 million acres of national forests from threats like logging, road building, and mining. The U.S. Forest Service published a draft environmental assessment that indicated its preference is for the most extreme of six options – a full elimination of roadless areas protections. The public has until Dec. 16 to weigh in on the proposal.

“Hundreds of thousands of Washingtonians throughout the state rely on roadless areas for clean drinking water and irreplaceable opportunities for outdoor recreation,” said Senator Cantwell, who spoke at the Seattle public meeting in support of roadless area protections. “We need the Roadless Rule to permanently safeguard our remaining undeveloped forest lands as the foundation of our outdoor recreation economy, a home for wildlife, and a heritage for future generations.”

Local businesses like Fremont Brewing to outdoor industry leaders like Patagonia to other stakeholders like conservation and recreation groups and commercial fishermen voiced their opinions Saturday.

“As second-generation salmon fishermen, raised from childhood in Southeast Alaska, these waters, among these trees. is our home for four months of the year, as we troll our hooks through the deep, rich waters of the North Pacific,” said Tele Aadsen & Joel Brady-Power, co-owners of the F/V Nerka & Nerka Sea Frozen Salmon who testified at the Seattle meeting. “The rest of the year we make our home in Bellingham, self-marketing our catch to wild salmon-lovers in the Pacific Northwest and throughout the U.S. Like all Southeast Alaskans, our lives are inextricably bound to the Tongass.”

While Alaska is the current target, there can be little doubt that other western states, including Washington, will be next. Here in Washington State we have just over 2 million acres of Roadless Areas. They are a critical part of the quality of life we have come to expect. Roadless forests provide much of our clean and safe drinking water, protect fish and wildlife, and provide amazing back country recreation experiences.

The Tongass National Forest is the same distance from Washington State as Boise ID. On Alaska Airlines alone, there are 24 daily nonstop flights between Seattle and the southeast Alaska communities of Sitka, Ketchikan and Juneau. Additionally, five major cruise lines, offer 80 cruises departing from Seattle to the inside passage, the Tongass National Forest, and Glacier Bay National Park each summer. A significant number of commercial fishing permits held in Southeast and offshore waters in Alaska are held by fisherman with home ports in Seattle’s Fisherman’s Terminal or Westport.

Over the last year, the Mt. Baker-Snoqualmie National Forest has already greenlighted two projects that allow new road building in inventoried roadless areas, the Olivine Mine and Excelsior Mine Expansions. Continuing to allow roadbuilding in roadless areas and allowing statewide exemptions sets a dangerous precedent for the future management of the Forest and in Roadless Areas. This puts clean water, backcountry recreation, ancient forests and wildlife habitat at risk.

In 2018, more than 30 Washington breweries, all members of the Washington Brewshed® Alliance, joined more than 150 conservation, recreation, wildlife and hunting and fishing organizations as well as faith leaders, local businesses and elected officials from Washington State in support of retaining existing protections for roadless areas.

The following individuals provided a testament: