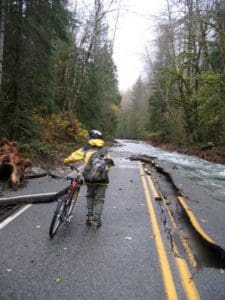 Washington Wild is working to help support a sustainable road system on our national forests that both prioritizes maintenance of important access roads while addressing aquatic and terrestrial impacts on water quality, wildlife, and the broader watershed.

THE PROBLEM: There are nearly 370,000 miles of Forest Service roads crisscrossing our national forests, including 22,000 miles here in Washington State–many of them leftover from the peak timber harvests of decades past. That amounts to almost eight times the U.S. federal highway system. This creates many challenges for the Forest Service to manage such an oversized, under-budgeted and under-maintained road system.

Today, the road network continues to support forest management activities in addition to growing recreational usage. Unfortunately, road budgets are unable to completely support this increase in demand as funding levels are now only 18 percent of what they were back in 1990.

THE SOLUTION: The Forest Service itself has worked on addressing the issue by requiring each national forest to create a sustainable road system plan that is based on both need and budget. Washington Wild has taken a leadership role in mobilizing support from conservation and recreation groups to both prioritize maintenance for roads providing important access while at the same time identifying impassable roads for decommissioning. We have coordinated comment letters to road maintenance project proposals by the Forest Service in support of a sustainable road system.

In a bold move for a region long reliant on felled old-growth trees, the Biden administration announced a new plan for the Tongass National Forest to restore and implement additional safeguards. Not only will the previous Roadless Rule protections be reinstated (as promised in June) but new safeguards will be added, including $25 million in […]

It’s a good day for ancient forests. The Biden Administration has committed to restore Roadless protections in the Tongass National Forest.   In October 2019, the Trump administration announced a controversial proposal to eliminate long-standing protections for unlogged old-growth forests within Alaska’s Tongass National Forest. The proposed management plan was an override to the 2001 […]