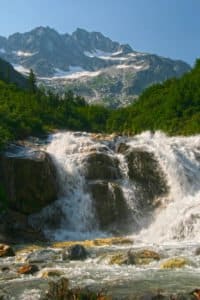 While we work to permanently protect intact forests and free-flowing rivers as Wilderness and Wild & Scenic Rivers, it is also important to restore what we have lost. In the Olympic and Cascade Mountain Ranges alone there is an estimated loss of around 90% of historic old-growth forests, and of the 9 million acres of national forest within Washington, 80% are fragmented by roads. The math on what we could gain through restoration shows seemingly endless possibilities, though there are limitations.

Wild places in their original form don’t require much in the way of maintenance, just diligent protection. Restoring the landscape is another story. For example, the Elwha River Dam, the largest dam removal project in the U.S. to date, was removed in 2014 and by 2016 the salmon had begun to return. This decades-old project is a testament to how nature can take over the recovery after restoration efforts are completed.

The total cost of the project was $300 million.  Restoration efforts can be expensive but are an important conservation activity.  That’s why we work both to protect what we have and restore what we’ve lost. 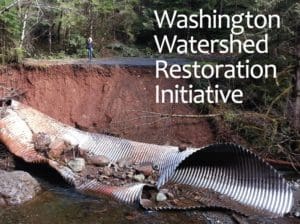 Since 2008, the Legacy Roads and Trails (LRT) Initiative has provided $430 million nationwide to:

This federal funding is not only restoring our watersheds and helping to maintain key access roads, but it also creates or supports an average of 350 rural jobs in Washington State each year.

Advocating for a Sustainable Road System

The national forest road system has 374,000 miles of roads – which amounts to 8 times the size of the national highway system. The pure number of roads is unsustainable, especially as funding and agency maintenance budgets have continually declined over the past decade.

Washington Wild works to bring together a broad coalition of conservation and recreation stakeholders to prioritize maintenance of Forest Service roads that provide access to trails, campgrounds, and other recreational infrastructure so that current and future generations can explore the wild places we work so hard to protect. Simultaneously, we advocate for reducing the size of the overall road system by decommissioning old and decaying logging roads that no longer or never have provided recreational access and pose aquatic risks to our watersheds. 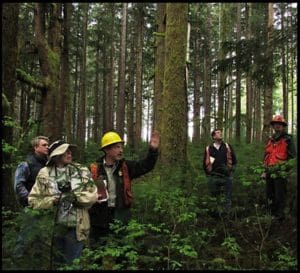 Many areas of our national forests are still suffering impacts from past unsustainable logging practices or clear cuts. Washington Wild is working with a diverse group of stakeholders including rural community leaders and timber interests to find common ground around pursuing forest restoration thinning in previously logged stands in order to create a more diverse and healthy forest with the potential for future old-growth characteristics. Ultimately, the purpose is to show we can simultaneously create a more ecologically resilient forest, provide for increased, sustainable timber harvests on national forest lands and provide economic benefits to local rural communities within the context of the Northwest Forest Plan.

In a bold move for a region long reliant on felled old-growth trees, the Biden administration announced a new plan for the Tongass National Forest to restore and implement additional safeguards. Not only will the previous Roadless Rule protections be reinstated (as promised in June) but new safeguards will be added, including $25 million in […]

It’s a good day for ancient forests. The Biden Administration has committed to restore Roadless protections in the Tongass National Forest.   In October 2019, the Trump administration announced a controversial proposal to eliminate long-standing protections for unlogged old-growth forests within Alaska’s Tongass National Forest. The proposed management plan was an override to the 2001 […]