At Washington Wild, we work hard to protect our state’s magnificent Wilderness Legacy for generations to come.  Seattle ranks  #1 among the 25 largest U.S.  cities  for having the most Wilderness within a 100 mile radius, totaling 3.6 million acres!  True to our mission, our work spans all of Washington State and ensures that our beautiful corner of the world stays wild and green by protecting federal wild lands and waters. 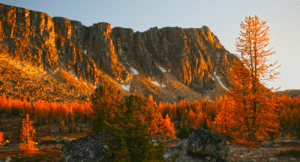 In 1964, the United States Congress passed a law known as The Wilderness Act, which created a National Wilderness Preservation System to provide an “enduring resource of wilderness” for future generations. Wilderness is only applicable to federal land and is also unique in that only Congress can designate areas for Wilderness use and protection. The tradition of protecting wilderness dates back almost 100 years to the country’s foremost conservationists Theodore Roosevelt, John Muir, and Aldo Leopold to name a few who recognized the need to set aside America’s wild places in order to preserve our watersheds, wildlife habitat and the great outdoors. However, the formal designation of Wilderness began with the passage of The Wilderness Act in 1964.  Click here to read more.  Today, Washington has 31 wilderness areas which you can discover here.

The Next Generation of Wilderness 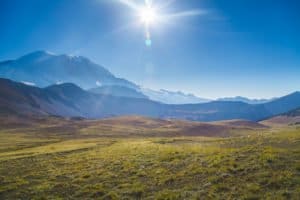 On the shores of Lake Wenatchee in 1999 at a wilderness community retreat organized by Washington Wilderness Coalition, local activists and wilderness advocates began to plan for the “next generation of Wilderness” in Washington State. The Wild Sky Wilderness had a unique focus on preserving low elevation forests and watersheds that were left out of the significant Wilderness that was designated in the 70’s and 80’s. In fact, of all the national forest Wilderness previously designated statewide, only 6% was low elevation (i.e., below 3,000ft).

Essentially, the timber industry (at their peak then) utilized their political clout precluding much of any old growth and mature forests (which are found at lower elevations) to be protected.  The Wild Sky proposal set out to change that by literally moving those previous wilderness boundaries “down the hill.” As a result, a full 30% of the proposal included low elevation forests. These lands represented protection for low elevation mature and old growth forests, prime wildlife habitat including salmon spawning streams and multi season family accessible recreational opportunities. Building on the success of Wild Sky, 50% of the proposed additions to the Alpine Lakes Wilderness and 75% of the proposed Wilderness in the Wild Olympics included low elevation forests.

Since our founding in 1979, Washington Wild has played an integral role in the protection of nearly 3 million acres of Wilderness throughout Washington State, including: 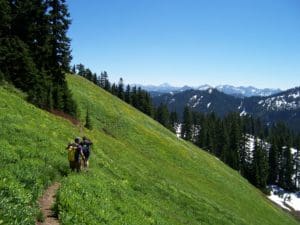 Paddlers on the Dosewallips River. Photo Courtesy of Tom O’Keefe.

The Wild & Scenic Rivers Act was passed in 1968 to ensure that the free flowing character, water quality and outstanding values of these rivers are protected for generations to come. The Act is notable for recognizing the potential for their appropriate use and development by encouraging river management that crosses political boundaries and promotes public participation in developing goals for river protection. According to the Wild and Scenic River Act, ”certain selected rivers of the Nation which, with their immediate environments, possess outstandingly remarkable scenic, recreational, geologic, fish and wildlife, historic, cultural or other similar values, shall be preserved in free-flowing condition, and that they and their immediate environments shall be protected for the benefit and enjoyment of present and future generations.“

Wild rivers give us clean water, world-class recreation and unmatched opportunities for inspiration and solitude connection to nature. They bring jobs and economic benefits to local communities and they provide critical habitat for salmon, steelhead, and other fish and wildlife.  Click here to read more.

14 years ago today the Wild Sky Wilderness Act was signed into law! Washington Wild began leading a coalition in 2000 to protect this special place located near the towns […]

Washington Wild Coordinates Letter to Rep. Adam Smith in Thanks for Advocating for Wild Olympics as part of the NDAA

On November 10, Washington Wild sent a letter to Rep. Adam Smith (D-WA-09) undersigned by 32 progressive and environmental organizations, elected officials, and local businesses thanking him for his leadership […]