Today, the Snohomish County PUD commission has decided to abandon efforts to build a hydroelectric dam on Sunset Falls on the South Fork of the Skykomish River. Sunset Falls, near the scenic town of  Index, is the third of the three waterfalls which drop 100 feet on the South Fork Skykomish River. This project has been controversial since initial discussions began in 2011. 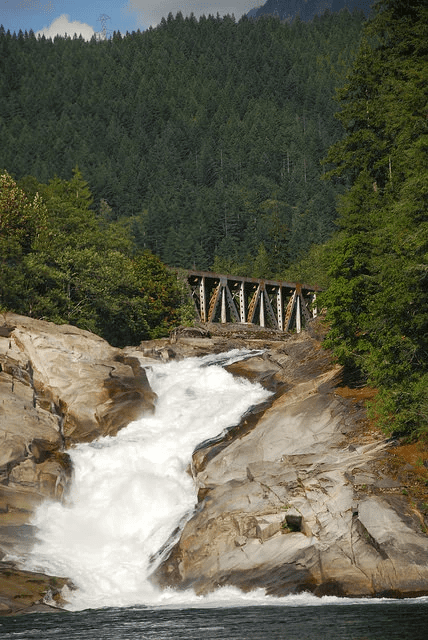 The Sunset Falls project was proposed on a river segment with multiple state and federal protections. The South Fork Skykomish has been designated as a State Scenic Waterway and the U.S. Forest Service has recommended it for Wild and Scenic designation. The  reach is also protected from hydropower development by the Northwest Power and Conservation Council, and instream flows are protected by the State of Washington. Despite these protections and overwhelming public opposition, Snohomish County PUD decided to move forward with a project proposal.

Since 2011 Washington Wild has worked with a coalition of conservation and recreation organizations to oppose the project citing concerns about the development of hydropower on a currently free-flowing river, threats to the recreation opportunities near Sunset Falls, and economic viability of the project. Through these efforts the Snohomish County PUD announced its decision to abandon the project to continue their energy conservation focus.

“Based on its long-term energy planning and needs, the PUD has determined a continued emphasis on conservation,” PUD spokesman Neil Neroutsos said. “PUD staff was directed by its board of commissioners on Tuesday to not pursue a final federal license for the Sunset Falls hydropower project on the South Fork Skykomish River at this time.”