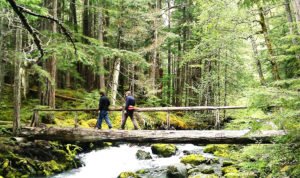 The House of Representatives passed the Wild Olympics Wilderness and Wild and Scenic Rivers Act (H.R. 999) on February 26 after being introduced by Representative Derek Kilmer.  The bill is part of a package of public land protection bills called Protecting America’s Wilderness and Public Lands Act (PAW Act).

The early passage in the new congressional session marks strong momentum for the legislation, which will soon be introduced to the Senate by Senator Patty Murray.

Check out recent press on this important issue:

“The commissioners apparently think of value only in terms of dollars and how much can be extracted from our public lands. They should consider the intrinsic value of these natural resources that are worth far more as a vibrant ecological system than whatever profits may be gained by its exploitation and destruction.”

“Near-record crowds that flocked to Olympic National Park and national forest last summer underscore the need for additional recreation areas on the peninsula. Forest Service wilderness lands would more than double under the legislation, and 19 new Wild and Scenic Rivers would be designated — the first-ever on the peninsula.”

“President Joe Biden set a goal of having the United States legislatively protect 30 percent of its public lands and oceans by 2030. While the decree might be overly ambitious, it is far preferable to the previous administration’s view that public lands should be profit-making engines for extraction companies. By definition, public lands are owned by all Americans; protecting them now can ensure that they remain pristine for future generations.”

“The Senate should follow the House in voting to designate 1.5 million acres of western wilderness for federal protection. That includes 126,000 acres of critical Olympic Peninsula land containing the area’s last unprotected old-growth forests.”

“’As someone who grew up on the Peninsula, I know how important our public lands are to the fabric of our communities […] To me, protecting these areas isn’t just about saving them for future generations. It’s about jobs. Protecting good jobs and creating good jobs.’”

“’The Wild Olympics proposal contains some of the most amazing and pristine fishing and backcountry experiences in North America and has the support of hunters and anglers throughout the Pacific Northwest,’ said state BHA conservation and policy leader Matt Little.”

“[T]he legislation would have no impact on the harvestable timber base and will not close, decommission, or otherwise restrict access to any existing forest service roads or trailheads, will not affect any private property rights, and it will not impact how the Washington Department of Natural Resources’ manages state-owned lands.”