Today Washington Wild joined 177 other conservation and public interest groups across the nation who signed onto a comment letter regarding the U.S. Forest Service’s proposed rulemaking to revise its National Environmental Policy Act (NEPA) regulations. The National Environmental Policy Act ensures that proposed actions on our national parks, forests, and wildlife refuges are done with appropriate environmental review and public input. The letter calls on the Forest Service to abandon this rulemaking effort which would leave the public with no role in more than 90 percent of the decisions made for our national forests and allow for the sweeping destruction of national forests across the country.

Some of the plan’s worst loopholes would allow:

Today’s letter marked a nation-wide collaborative effort to ensure citizen’s voices are heard in decisions regarding our public lands. Washington Wild applauds The Western Environmental Law Center for their technical analysis and for convening a wide group of stakeholders. During the allotted comment period, Washington Wild worked to engage its members and send over 130 letters to the Trump Administration. 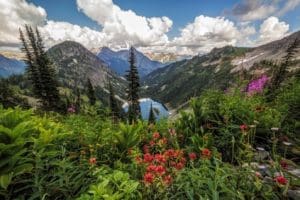 According to the Forest Service, the proposed rule is designed to “increas[e] the pace and scale of work accomplished on the ground” – with a focus on removing hazardous fuels – by “complet[ing] project decision making in a timelier manner.”3 The proposal, however, is much broader than its stated goals, exempting unqualified commercial timber harvest and a breathtaking range of other forest management activities from environmental analysis or public review via a suite of new and expanded categorical exclusions and other mechanisms that fundamentally undermine NEPA’s bedrock principles of government transparency, accountability, public involvement, and science-based decision-making. Rather than focusing on and addressing the actual causes of agency inefficiency in environmental decision-making (e.g., funding, staffing, training, and turnover), the Forest Service has targeted America’s “magna carta” of environmental laws with its radical proposal. Ironically, the result is likely to be increased litigation and poorer management of our shared national forests, as corners are cut, laws are broken, and the public is cut out of decision-making.