Today Washington Wild joined 12 other conservation and recreation organizations who signed onto a comment letter to the Mount Baker Snoqualmie National Forest. The letter calls on the Forest Service to decommission a temporary road that was built by the USFS to remove old toxic waste from the once-mining town of Monte Cristo that posed threats to wildlife, the environment and public health. An exception was used to build the temporary road through an inventoried roadless rule to address health and safety concerns relating to cleaning up toxic waste from the Monte Cristo SuperFund site. The road was never meant to be permanent or sustainable and is required to be deconstructed once the monitoring period for the cleanup is completed.

However, the Forest Service is currently considering keeping this temporary road open to allow motorized use for local innholders and ongoing administrative use. Unfortunately, keeping the toxic clean up road open would violate the spirit of the exception used under the Roadless Rule and set a dangerous precedent for future road development proposals.

Today’s letter was the latest in continued support for the 2001 National Forest Roadless Area Rule. Washington Wild has spearheaded efforts fighting for roadless areas including letters opposing efforts to weaken the 2001 Rule and threats to roadless areas as part of the Olivine Mine expansion and Excelsior Mine redevelopment. 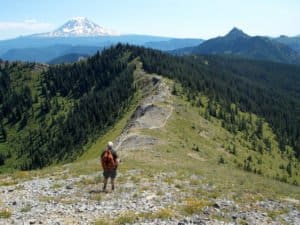 In the 1890s a mining boom drew thousands of people to Monte Cristo, an isolated area nestled in the mountains along the eastern edge of today’s Snohomish County. By 1893 there were more than 200 mining claims, however flooding along the rail line and miscalculations about the mining potential caused the production to stall and then cease by 1907.

In modern times Monte Cristo has been a popular destination for hiking. An old county road provided an easy, family-friendly hike into the townsite until the early 2000’s. At that time a couple major floods damaged the road and destroyed the bridge that crosses the South Fork Sauk River, limiting access to those willing to ford the river or traverse over a slippery old tree that has fallen across the river.

Unfortunately, the tailings left behind by the old mines contained toxins, including arsenic and lead, which polluted the environment and a posed public health risk to visitors. To address these issues the Forest Service completed a multimillion-dollar clean-up over the last several years. In order to access the mines to complete the clean-up, a temporary road was constructed.

This road, known as the CERCLA road, had to receive special authorization to be built because it goes through an Inventoried Roadless Area (IRA). A Roadless Area is a special designation for sections of National Forest where there are no roads, and where it is illegal to construct roads or associated logging activities. These intact forests provide vital ecological services — wildlife habitat, watershed protection — and provide unique backcountry recreation opportunities. The Roadless Rule is a balanced and popular policy that has stood the test of time. With more than one-half of America’s National Forests already open to logging, mining, and drilling, the Rule was intended to preserve the last third of undeveloped forestlands as a home for wildlife, a haven for recreation, a source of clean water and a heritage for future generations.