Today, an international coalition of more than 140 conservation, recreation and wildlife groups as well as local elected officials, businesses and Tribes and First Nations continues to grow to a proposed mining permit in the Skagit Headwaters. A letter signed by more than 30 British Columbia organizations and local businesses was the latest evidence of opposition to Imperial Metals’ proposed mining permit near Manning and Skagit Provincial Parks in the Skagit Headwaters.

“The opposition to the proposed mine permit in the Skagit Headwaters continues to grow as we await a decision by the BC Government. This latest push is highlighted by British Columbia organizations, outdoor industry leaders and local businesses that would be impacted economically by new mining in this incredible area,” said Tom Uniack, Executive Director for Washington Wild, a statewide conservation organization who is coordinating an international coalition of U.S. and Canadian stakeholders and Tribes and First Nations in opposition to the proposed mining and logging in the Skagit Headwaters.

In June, members of the coalition launched a paid media print and digital campaign in the Vancouver Sun and Province newspapers calling on Premier Horgan and the BC Government to deny a proposed mining permit on crown land between Manning and Skagit Provincial Parks. To date, more than 6,000 individuals have sent letters or emails to the British Columbia government and other entities opposing the mining permit. 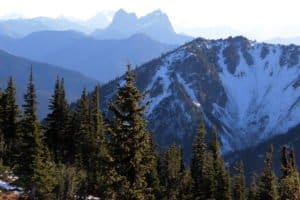 Photo Courtesy of the Wilderness Committee