Today, Washington Wild joined 93 other conservation and public lands groups on a letter to the EPA urging them to abandon current efforts under the Trump Administration to repeal the Clean Power Plan (CPP). Groups asked the Environmental Protection Agency to do its job and protect the environment by swiftly implementing the Clean Power Plan, for the health of the public, our planet and our public lands. 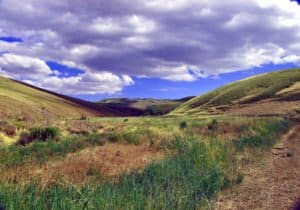 The high, and rapidly increasing level of carbon dioxide in the atmosphere is causing an unprecedented rise in temperatures and extreme weather events, increasingly harming our national parks, forests and wild lands and threatening the health of their millions of visitors and neighboring communities. The CPP is a vitally important step towards protecting national parks and wild lands from the worst threat they face – climate change.

Impacts to our public lands from climate change vary in intensity and scope, affecting coastal areas burdened by rising oceans and unusually powerful storms, mountain ranges experiencing widespread melting of glaciers, forests suffering from longer and more intense wildfires and wildlife from microorganisms to large mammals struggling with unpredictable and abnormal weather extremes. Such devastating harms are eroding the very essence of what public lands, including national parks, across America intend to preserve and protect for future generations: wilderness, wildlife, heritage and culture.

Outdated coal-fired power plants are one of the most significant sources of unchecked carbon dioxide emissions that harms the health of our public lands and drives the deeply concerning climate change impacts such as those described above. By reducing carbon dioxide the CPP serves as one critical step forward to address this source of climate pollution. These reductions are not only realistically attainable but are based on a flexible set of compliance options that will deliver up to $93 billion in climate and public health benefits.

This cost-effective program is also an outcropping of EPA’s extensive engagement with industry, state and public stakeholders over the course of many years, which resulted in the “best system of emission reduction” of carbon dioxide from power plants that are interconnected by the electric grid. While coal plants are not always located directly next to our favorite national parks, wilderness areas, or forest trails, the pollution from these facilities knows no boundaries. By reducing carbon dioxide emissions from them, we will mitigate the negative effects of climate change and other power plant pollution that harms our communities, public lands and waters. Repealing the Clean Power Plan is irresponsible and does not serve in the best interest of the American people. The EPA should maintain the regulations set forth by the CPP and work to fulfill its mission of providing clean air and water to all Americans.