Today, guidebook author Craig Romano published an opinion piece in the Seattle Times detailing the multiple benefits of our roadless areas, and letting people know the time to act is now to defend them. Read the full Op-Ed.

“Now, more than ever, it’s time to speak up about preserving these pristine areas and the protections that keep them that way. An attack on the Roadless Rule anywhere is an attack on roadless forests everywhere.“ 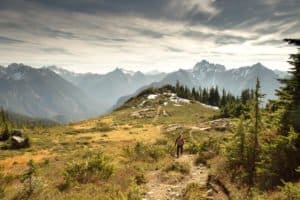 The Roadless Rule is a popular and balanced policy that protects nearly 60 million acres of undeveloped national forests from road-building and other industrial activity. It was developed over two years and issued by the Clinton Administration in early 2001 with widespread partisan support

However, our roadless areas, both here in Washington State and across the nation are under threat. Earlier this year, Alaska Senators attempted to exempt Alaska’s national forests from the Roadless Rule through a legislative rider attached to a funding bill. After their legislative attempts failed, Alaska’s Governor Bill Walker has asked the Trump Administration to weaken roadless area protections on Alaska’s national forests through a rule making. In addition, now the Utah Governor Gary Herbert has made it clear he also has plans to ask the administration to exempt his state from roadless area protections as well.

Washington Wild thanks Senator Maria Cantwell and Senator Patty Murray who have both supported legislation to make the current administrative protections of the roadless rule permanent and to protect our state’s 2 million acres of roadless areas that deserve to be preserved for future generations. Make your voice heard and protect the Tongass and our roadless areas now!