A new Forest Service draft decision would enable the U.S. Navy to surround Olympic National Park and Olympic National Forest with electromagnetic emitter trucks, resulting in high decibel jet training flights over ancient forests, popular trails and remote peaks on the Olympic Peninsula. The Navy has done a poor job of informing local stakeholders about the proposal and has failed to respond to thousands of public comments opposing the plan. 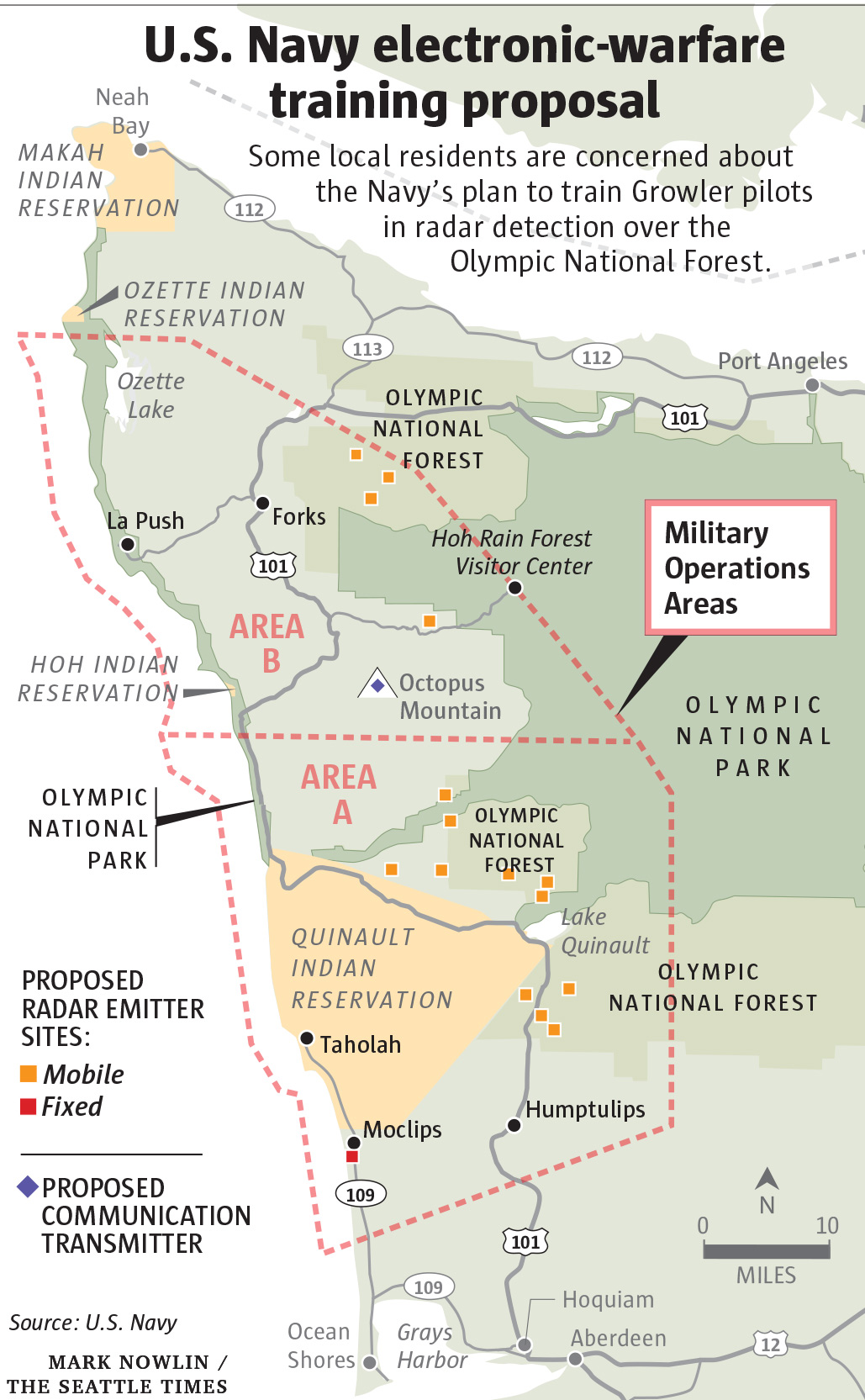 WHAT YOU CAN DO

The comment period for this opportunity closed on January 13th, 2017. For more opportunities see our Take Action Page.

The U.S. Navy already conducts electromagnetic warfare training in Idaho and Nevada. We should not sacrifice one of America’s quietest parks when other options are available.

STEP 1: Write an email comment to the Olympic National Forest in your own words asking the Forest Service to deny the Navy’s application. Feel free to reference the talking points provided below.

STEP 2: Send your comment via email to Olympic National Forest Supervisor Reta LaFord no later than Friday, January 13, 2017.
Be sure to sign your name, city and state:
EMAIL: rlaford@fs.fed.us
SUBJECT: Deny Permit for Navy Electromagnetic Warfare

Please CC: ariel@wawild.org  so we can keep a copy! Thank you.

If the Navy conducts increased fighter jet training over the peninsula, it would affect some of the most popular wilderness areas, trails and visitor centers at Olympic National Park, including the Hoh Rain Forest and wild beaches.

If you haven’t heard these planes before, listen to this video.

According to sound technician Gordon Hempton, who has spent decades researching noise pollution and making recordings of natural sounds throughout the United States, the Olympic Peninsula is “the most acoustically diverse” and “least noise-polluted” place in the Lower 48 states. Whether you love the crash of the ocean surf, the bugling of Roosevelt elk or the whistling of marmots in high mountain meadows, Olympic is a peaceful and accessible place where you can actually hear the beauty of nature in all its diversity.

This is not the only place available to the Navy, but it’s the closest to their runways on Whidbey Island. Currently the Navy does similar training at Mountain Home Air Force Base in southern Idaho, which is not far away for a fighter jet. There are other airbases and military airspace available, too. According to the Navy’s own analysis, using the Olympic region is a convenience and not essential for its training needs.

Many concerned citizens and conservation organizations are encouraging the National Park Service to designate Olympic National Park as a certified Quiet Park to help preserve its wild character and rare soundscape. The National Park Service’s Quiet Parks Program provides management tools and resources for monitoring and reducing noise pollution. This special designation will bring us one step closer to making sure one of the Northwest’s most beloved natural gems is protected for generations to come.