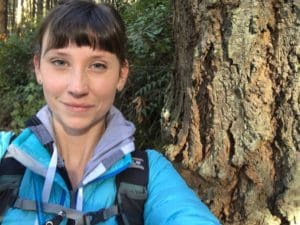 Hello there! I’m thrilled to join the Washington Wild team as the Membership and Events Coordinator. Growing up, the majority of my time was spent exploring the outdoors. Hiking, picnics, camping and all the other mini adventures my folks could think of. As a young girl, I was intrigued by the giant trees, trailing behind my older brother as we climbed up rocks and jumped off fallen tree logs – this was family time. Little did I know, I would eventually head down a path that allowed my love of the outdoors to deepen and grow in a way I never imagined. After graduating with a degree in Parks, Recreation and Tourism Administration from San Francisco State University, I was lucky to witness the impact of trail and park maintenance in a dense urban environment with the San Francisco Parks Alliance.

Backpacking in California was my first true Wilderness experience – it was incredible. I went with friends and that entire time it was pretty much just the three of us as we camped amongst the mountains, disconnecting from the busy city life and immersing ourselves in nature. I simply could not get enough and knew I wanted more.

I found more when I relocated to Seattle in early January 2017. Driving up the coast and into Oregon and then to Washington, I was overwhelmed with the abundance of greenery, water and life in the Pacific Northwest. Within days, I felt like I found home. It’s heartwarming to move to a community that cherishes the outdoors as much as I do and such an honor to be working with an organization that has preserved an incredible amount of Wilderness for the state of Washington. I can’t wait to see where we go next!