More than 5,000 Washingtonians Raise their Voice for Long-Term Protection of the Methow

Last night more than 450 people filled the Winthrop Barn at a public meeting and more than 5,000 individuals sent comments to the BLM to raise their voices for long-term protection from Mining for the Methow Valley. Washington Wild is a member of the Methow Headwaters Coalition along with several other conservation and recreation groups.

“The fact that there is standing room only, there’s people above here, and we really can’t fit anyone else,” said Jacob Childers, BLM Withdrawal Program Lead from Oregon. “That definitely has a bearing on what the decision is going to be as our state director moves it forward. This proposal is on the big radar in the Secretary of Interior’s Office” 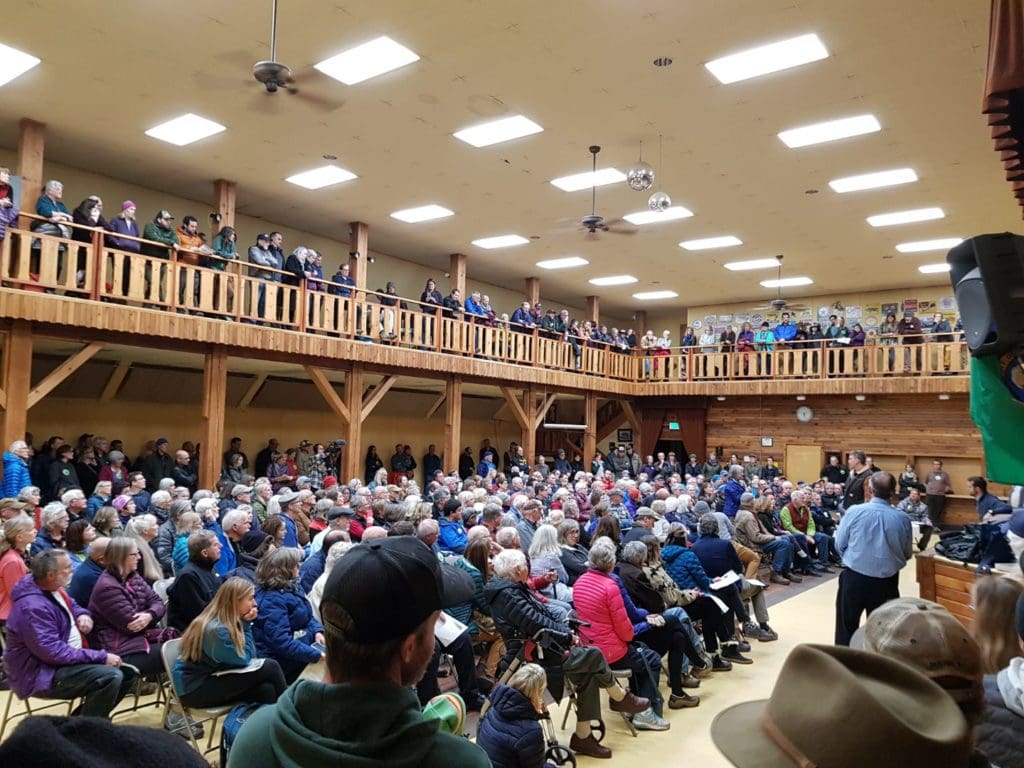 Mining interests have targeted the Methow Valley for exploratory drilling near Flagg Mountain as a preliminary step to developing a mine in the watershed. Mining in the area could have harmful effects on clean water for fish and residents, as well as have negative impacts on recreation and tourism in the Methow Valley which brings nearly 1 million visitors to the area and more than $150 million annually to Okanogan County.

Currently there is an interim two-year mining ban in place while the BLM considers a 20-year mining protection for the region, but this temporary protection expires this December. The Forest Service has already recommended the 20-year withdrawal to the BLM and now the BLM will send a recommendation to the Secretary of Interior.

Those present at the meeting echoed the concerns conservation and recreation groups have put forward about threats to clean water and the local recreation economy in the valley.

Thank you to everyone who attended a public meeting or sent in a comment letter in support of long term protection for this special landscape! Your strong show of support makes a difference. Watch the highlights from the public meeting here.

Back in October of 2016 Washington Wild, as a member of the Methow Headwaters Campaign, joined 8 other conservation and recreation organizations on a joint comment letter. The letter urged the U.S. Forest Service to take immediate action upholding their commitment to a mineral withdrawal for the Methow Headwaters region of Washington State. The letter expressed the need to act quickly and protect the Methow from mining interests by officially starting the mineral withdrawal process by the end of the term and prevent facing down another exploratory drilling season on Flagg Mountain.

In May of 2016 Senators Patty Murray (D-WA) and Maria Cantwell (D-WA) introduced the Methow Headwaters Protection Act of 2016 which would protect 340,000 acres of National Forest in the Methow Valley from potential development of a large-scale mine. The legislation, to be considered during the BLMs two-year mineral withdrawal, would permanently restrict potential mining related development (including near Flagg Mountain) in order to protect the headwaters of the Methow River and the robust local tourism economy and rural communities in the valley. Read Sen. Murray’s press release.

On December 30th, 2016, in response to overwhelming local support, the Bureau of Land Management (BLM) officially announced the segregation notice for 340,000 acres in the Methow Headwaters region of Washington State. This essentially protects the Methow from mining for a two-year period in which these lands are off limits to mining interests. The U.S. Forest Service has already evaluated the 20-year administrative withdrawal and recommended its approval to the BLM. Just last week the BLM closed the comment period that culminated in an outpouring of support for long term protection of the Methow.