The Mt. Baker-Snoqualmie National Forest has issued a draft decision to move ahead with the Swen Larsen Quarry Expansion into the Mt. Baker West Inventoried Roadless Area in Whatcom County. Washington Wild coordinated and objection letter signed by 8 other organizations stating their concerns with the project moving forward. The 10-acre mining expansion will have impacts on old-growth and late successional forest, which has not been addressed by the Forest Service, and nothing has been included in the draft decision that would mitigate the loss of Roadless Area. Since 2016 Washington Wild and numerous conservation, recreation groups and local businesses have written two comment letters opposing this mining expansion during the scoping period and after the draft environmental assessment. 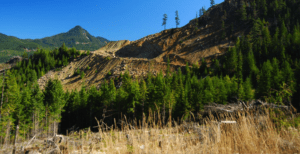 The expansion area is entirely within the Mt. Baker West Inventoried Roadless Area, which is supposed afforded protection from new road construction and related development under the National Forest Roadless Area Conservation Rule of 2001. Roadless areas are comprised of unlogged ancient forests which are underrepresented on national forest lands due to unsustainable logging practices decades ago. Roads have measurable and important impacts on the watershed and surrounding environment. The expansion area also includes intact ancient forests that serve as part of the municipal watershed for the City of Bellingham and its 85,000 residents.

Furthermore, the broader Mt. Baker West Roadless Area and Middle Fork Nooksack Road corridor are local destinations for recreational opportunities including climbing, horseback riding, hiking, paddling and other activities. The mine lies just to the north of the Twin Sisters, two popular summits on the western edge of Mt. Baker-Snoqualmie National Forest. While mine expansion would not directly impact access to the recreational resources in the area, it does pose significant environmental impact to the landscape and viewsheds that are important to the hiking, scrambling, and climbing experiences in this area.