The Trump Administration recently released a plan that will roll back protections for Alaska’s Tongass National Forest against wide-scale logging. Weakening this policy in Alaska will harm local and Indigenous communities, Southeast Alaska’s economy, salmon fisheries and other wildlife. Media attention has quickly grown in opposition to the Trump Administration’s plan both throughout Washington State and nationwide.

On 8/27/19 the Seattle Times featured a front page above the fold article, “Trump pushes to allow new logging in Alaska’s Tongass National Forest,” discussing the effects of the proposed plan.

Dan Blanchard, owner and CEO of the ad­ven­ture travel firm UnCruise Adventures, said in an interview that when he was working as a boat captain in the 1980s, “we had a difficult time avoiding clear cuts in southeast Alaska.”“The forest has come back,” said Blanchard, who has 350 employees and brings 7,000 guests to Alaska each year. “The demand for wilderness and uncut areas have just dramatically increased. Our view here is, there are very few places in the world that are wild. Here we have one, in southeast Alaska, and it’s being put at risk.”

The next day, the Seattle Times wrote an editorial, “Stop the assault on Tongass forest,” opposing the plan.

Rather than the rollback Trump proposes, the Forest Service should continue its current policy of reviewing Tongass proposals case-by-case. This process has authorized nearly 60 projects on Alaska’s protected roadless lands. America’s forests and salmon need more protections, not evisceration.

The roadless rule is long overdue to be given the full force of federal law, as both of Washington’s U.S. senators have proposed. The nation’s forestlands, and the wildlife dependent on them, require too much time to recover from damage to be vulnerable to whipsawing presidential policies. When the political climate changes, this legislation must be revisited.

On 9/9/19 The Seattle Times published a letter to the editor from Jack Lamb, the CEO of Aslan Brewing Co. This letter highlights the overlapping interests between the conservation and brewing communities in regard to protecting clean water. Aslan Brewing Co. is a member of Washington Wild’s Brewshed Alliance which works to connect Washington state breweries to water conservation initiatives.

As CEO of Aslan Brewing Co. in Bellingham, my business would not exist without access to clean water. Our entire industry depends on consistent water, sourced from protected water sources. In many cases, the source of municipal water stems from headwaters in our national forests in roadless areas, the same ones Trump wants to open to logging and development. Whether you care about salmon, wildlife, forests, safe and clean drinking water, or just great tasting beer, let’s keep our roadless areas protected. Everywhere. Forever. 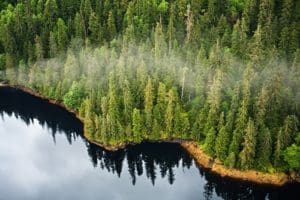 The Forest Service is considering changes in the Roadless Rule that could drastically impact some of the nation’s greatest forests and wildlands. These could have significant long-term economic impacts to Washington State. The Tongass National Forest and its roadless areas are a central draw and attraction to visitation from Washingtonians and other tourists from around the country and the world. The forest watersheds, wildlife habitat and scenery directly support the visitor experience to nearby national park areas.

Here in Washington State we have nearly 2 million acres of Roadless Areas. They are a critical part of the quality of life we have come to expect. Roadless forests provide much of our clean and safe drinking water, besides protecting fish and wildlife, and providing amazing recreation experiences. Washington’s wild forests are also a significant resource to our local economy. They inspire homegrown companies like REI, Eddie Bauer and the many other local businesses that provide recreation gear. Active outdoor recreation supports more than 200,000 jobs in Washington and contributes more than $26 billion dollars to our state’s economy.