Making a Splash! Looking Back at The Brewshed® Alliance’s 2022 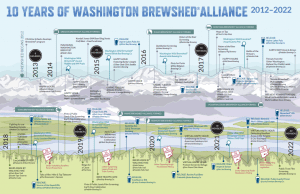 A Decade of Conservation

Marking the 10th Anniversary of the statewide alliance, 2022 was a particularly special year for the Brewshed®. From its founding a decade ago to today, the Brewshed® Alliance and the excitement around the community has grown so much. From Blaine to Vancouver, Rochester to Spokane Valley, the Brewshed® is now nearly 90 members strong! Among those members, we added 11 new brewing industry partners in 2022 alone. 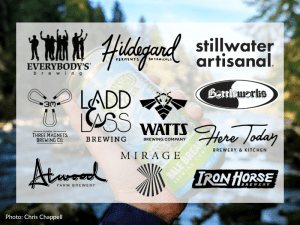 But the success of Washington’s Brewshed® hasn’t just been marked by an increase in size and geographic presence, the scope of impact has expanded as well.

Our Conservation & Brewshed® Program Manager, Chris Chappell, likes to describe being a Brewshed® member as ‘pick your own adventure’. Lucky for us, and to the benefit of Washington’s wild lands and waters, our Brewshed® is an adventurous bunch! 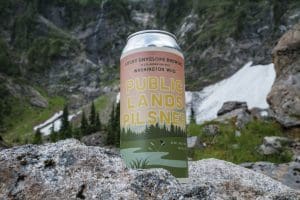 Since brewing is what our Brewshed® partners know best, it’s no surprise that among the variety of ways our partners advocate for our wild lands and waters is through beer. Over the years, breweries have crafted a wide range of unique and delicious collaboration beers such as Counterbalance + Peddler Brewing’s Wild & Scenic Hazy IPA, 2019 From Peak to Pint Charity Beer Series, Balebreaker’s Brewshed® IPA, and Lucky Envelope’s Public Lands Pilsner. Perhaps most notable is the Save the Snake River Lager, which by all accounts is the biggest PNW beer collaboration ever, with 50 industry partners across WA, OR, and ID taking part. Also staying true to our mission of sustainability and conservation, many of these beers have been brewed utilizing locally sourced, salmon-safe ingredients, demonstrated beautifully by Fair Isle Brewing’s Diane Saison.

Beyond crafting beer, our Brewshed® has also been instrumental in helping Washington Wild spread the word about conservation issues by hosting a variety of fun and unique community events. Taking place at locations throughout the state, our Brewshed® Members have helped organize such as tap takeovers, a soup battle, trivia nights, pub crawls, a luau, release parties, and the Brewshed® Beer Fest, to name just a few. 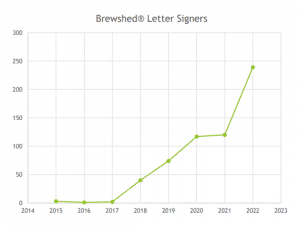 Demonstrating the power of raising our voices in unison, our Brewshed® members have also exercised their influence as beloved small businesses by signing on to comment letters sent to elected officials. As a conservation organization that works on protecting our wild lands and waters full-time, legislators are used to hearing from Washington Wild regularly and weighing in on proposed rules, regulations, or legislation. But when a group of businesses bands together in support or opposition of an issue, that tends to really get their attention.

Mining in the Skagit Headwaters Halted
The culmination of Alliance members signing onto comment letters, advocacy as part of an international coalition, and the collaboration beer Diane Imperial Saison brewed in late 2021 by Fair Isle Brewing, exclusively utilizing ingredients sourced or inspired by the Skagit Headwaters.

Snake River ‘Foodie’ Letter
In recognition of the extinction crisis facing many Northwest salmon populations, more than 229 food professionals—including 42 Brewshed® Alliance members—from across Washington State sent a letter to Governor Inslee, Senator Murray, and Senator Cantwell calling for them to deliver a comprehensive plan to restore the Lower Snake River.

Earth Week Keg Walk
After a two-year pause, the beloved Latona Pub Handtruckin’ Earth Week Keg Walk made a triumphant return! All kegs delivered to the pub during the week were transported across the city via non-motorized means and culminated with an Earth Day celebration.

MiiR Awards WA Wild $5,000 Grant
The MiiR Land & Conservation Grant funds place-based solutions to protect and conserve natural places, quality of life, and economies at risk of negative environmental impacts. WA Wild was selected as a grantee in recognition of not only the success of the Washington Brewshed® but also for licensing out the concept to 8 other states and providing a model for how conservation organizations and the craft brewing industry can work together.

Thornton Creek Gathering
A special event to celebrate the release of Garden Path’s Wild and Safe Band Together Saison, Watershed Pub & Kitchen hosted a gathering to serve up the new beer on tap, with folks from both organizations and the brewery on hand to discuss their missions. There was also a guided walk with volunteers from the Thornton Creek Alliance through the revitalized stretch of Thornton Creek just outside the pub’s doors!

2022 Wild Night Out
In no small part due to our Brewshed® Alliance members—through donations, sponsorships, and marketing—this year’s Wild Night Out was a roaring success raising $75,000 in support of our mission. We also were able to recognize the entire team at Watershed Pub & Kitchen, presenting owners Ben and Kelsey Curran with the 2022 Brewshed® Alliance Award. The relationships that have been created because of the Watershed team have been instrumental to the impact of the Alliance.

Beer Release: Save the Snake River Lager
Released on October 4th at Stoup Brewing, Save the Snake River Lager sent a powerful message to our NW elected officials: Now is the time to support salmon and steelhead recovery with a comprehensive plan to remove the four Lower Snake River dams. Our biggest Brewshed® collaboration yet, this crisp, refreshing lager dry hopped with Strata hops featured 50 brewing industry businesses across Washington, Oregon, and Idaho.

Brewshed® Featured on Bigger Than Beer Podcast
Our very own Conservation & Brewshed® Program Manager, Chris Chappell, and Ray Kwan, Co-Founder of Lucky Envelope Brewing and Washington Wild’s Board President, sat down with Yakima Chief Hops for the latest episode of their podcast, Bigger Than Beer.