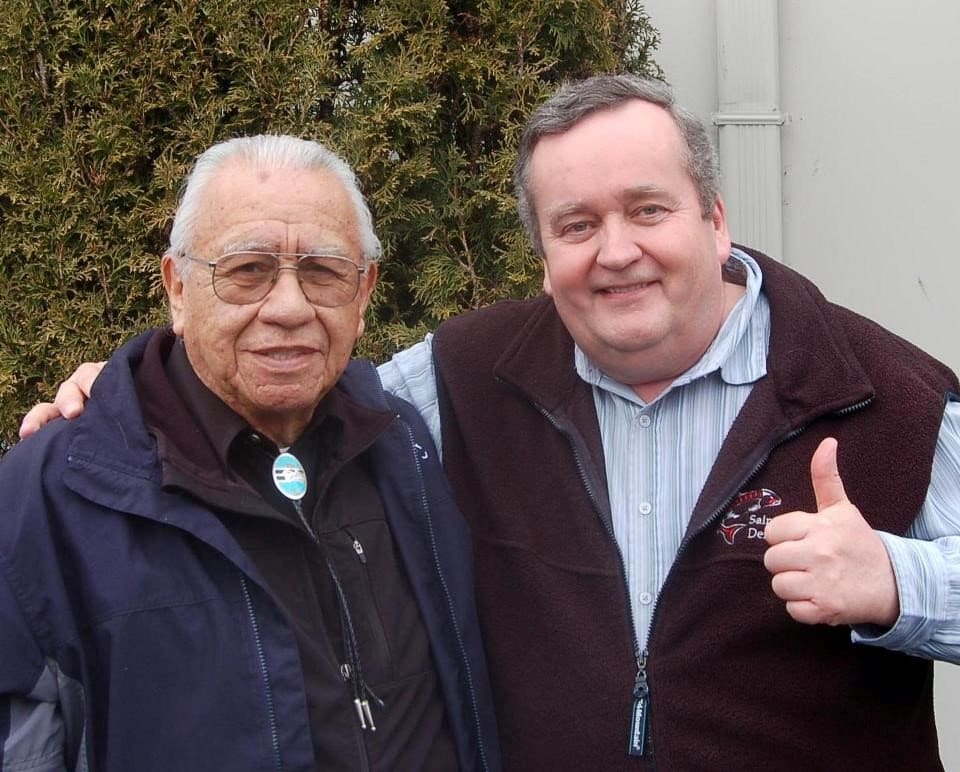 “I don’t believe in magic. I believe in the sun and the stars, the water, the tides, the floods, the owls, the hawks flying, the river running, the wind talking. They’re measurements. They tell us how healthy things are. How healthy we are. Because we and they are the same. That’s what I believe in.”  -Billy Frank, Jr., 1931-2015

Billy Frank Jr. was my mentor and my spiritual brother. In our years of traveling life’s path together he taught me many things. How could I not be impressed by this man who devoted his life to the survival of salmon, the Native way of life, and the restoration and protection of our natural environment? He was a warrior in the truest sense who always stood up for the traditions and legacies of his people, whether it meant going to jail or championing the principles of cooperation.

I had the honor of working with Billy for several decades as a journalist, public relations manager, and lobbyist. It was a privilege to be able to help write his story.

When I was asked to help Washington Wild and other environmental organizations strengthen relationships with local Tribes over the past few years, I was very pleased to accept. In large measure that was because of the knowledge Billy imparted to me, and the experiences we shared. There may have been a few times we differed with some environmental organizations’ perspectives, but those were dwarfed by the many times we worked cooperatively toward common objectives. These were the instances when our quest for clean and healthy water, air, land, fish, and wildlife merged and benefited from mutual support and team effort. We found camaraderie in state and federal legislative efforts, in education and the media, and grassroots fieldwork.

As my friends in Washington Wild and other environmental organizations have come to realize, one of the keys to success in these efforts is respect for tribal governments and treaty-protected rights.


There are so many examples of this, ranging from the effort to retain instream flows in our rivers and the preservation of wetlands, to the prevention of oil spills and the reduction of greenhouse gases. One excellent example is the incredible cooperative effort to restore the Nisqually estuary, which has now been named after Billy in acknowledgment of his many years of outstanding leadership.

My hope is that there will be many more examples to come in the years ahead. The many challenges we all face, (e.g., threats to endangered salmon, proposed mining on our rivers, forests and mountains,  and the challenge of Climate Change) cry out for such cooperation. It is especially essential in the face of the current anti-environment federal regime. We can make progress together that none of us can make alone.

As my friends in Washington Wild and other environmental organizations have come to realize, one of the keys to success in these efforts is respect for tribal governments and treaty-protected rights. I was inspired to see Washington Wild respond to this need recently by finalizing a board resolution to create genuine empathic understanding of tribal treaty rights and lifeways as they guide their work to protect wild lands and waters moving forward. They have learned to respect tribal heritage and protocols. They know there is no cookie cutter approach to working with varying tribes, that it is important to seek tribal support and positive tribal relations on a watershed-to-watershed basis and to respect tribal decisions, whatever they may be.

Every tribe we have met with over the past few years has appreciated these efforts to support them, and with proper follow up I believe there will be many positive outcomes.

I know Billy is smiling upon these cooperative efforts from his place at the Great Council Fire, and I pledge to always support them.

Indians and non-Indians can be brothers after all.

Steve Robinson is the owner/President of SR Productions and served 26 years working with Billy Frank, Jr. at the Northwest Indian Fisheries Commission where he was the Public Affairs Manager and Policy Analyst. He is of Salish Kootenai descent.

Interested to contributing to the WA Wild Blog? Email us at info@wawild.org for more information.