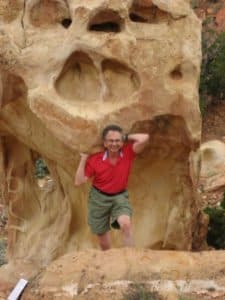 When I began canoeing and rafting Washington’s rivers in the 1980s, I quickly realized there was no consistent source of information about routes and good water levels.

So I began researching and writing my own guidebook, published by Mountaineers Books (1987, 1992, 1996): Washington Whitewater. In the course of researching my guidebook, I discovered that hydropower developers had plans for projects on many of the rivers I paddled. They were planning to dam up my rivers! So, I formed the Washington Rivers Council in 1984 and began organizing river recreationalists to create a constituency to oppose these projects.

In 1978, ten years after the establishment of the Wild and Scenic Rivers Act, Washington welcomed its first designated Wild and Scenic Rivers as part of the National Parks and Recreation Act. The Skagit River and its tributaries, the Sauk, Suiattle, and Cascade Rivers, were the first in the State to receive federal protection from dams and recognition of their outstandingly remarkable values. The Act designated nearly 160 miles of wild, free-flowing rivers.

The Columbia River Gorge National Scenic Area Act added nearly 20 more miles of federal Wild and Scenic designations for the Klickitat and lower White Salmon Rivers in 1986. In 1988, Congressman John Miller (D-WA01) introduced legislation to designate the Pratt River in eastern King County as Wild and Scenic, but the bill did not become law.

Armed with this information, we prepared an ambitious proposal for designation – more than 2,200 miles of Washington rivers statewide, which we presented to the Washington Congressional Delegation. The proposal was inspired by a statewide bill that became law in Oregon in 1988, which designated 1,500 miles of new Wild and Scenic Rivers. Unfortunately, this was right at the height of the timber wars over the protection of old-growth forests. The Congressional delegation told us they couldn’t do anything with rivers while they were wrestling with the protection of old-growth forests amid the din of the timber wars. So the idea of a major Wild & Scenic Rivers bill for Washington was pushed onto the back burner for many years.

In 2008, Washington Wild and other conservation organizations rekindled their focus and passion for protecting our wild waters. We realized that a Wild & Scenic River designation was a perfect complement to Wilderness designation, providing an additional tool to protect important lands that could not be protected as Wilderness either, because they were roaded, or included non-conforming uses, like mountain bike trails. This movement culminated in a Wild and Scenic River workshop for wilderness advocates sponsored by Washington Wild, American Whitewater, American Rivers, and others.

Since then, nearly all of the Congressional public lands proposals in the state include Wild and Scenic River designations, including two proposals currently moving through Congress: the Alpine Lakes Wilderness and Wild and Scenic River additions (Middle Fork Snoqualmie and Pratt Rivers) and the Wild Olympics (19 rivers and their tributaries). These wilderness/river proposals provide for landscape protection all the way from the snow-capped peaks to the lowland river valleys.

I could not think of a better legacy to leave my two children.

Doug North currently serves on the Board of Washington Wild and has been a leading river advocate in Washington State for the past three decades.