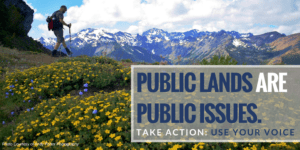 URGE your member of Congress to support public lands and oppose mounting attacks on our national parks, forests, and refuges!

An all out war on our public lands has already begun. On their FIRST day the newly elected U.S. House of Representatives passed a controversial provision (H.R. 5) devaluing our federal parks, forests and national wildlife refuges. The provision in essence implies our public lands have no intrinsic or economic value and paves the way for transferring or selling off our public lands to the highest bidder. Days later, Congressman Jason Chaffetz (R-UT-3) Introduced legislation (H.R. 621) that would direct the interior to immediately sell off an area of public lands equaling 3.3 million acres.

Several amendments associated with a rarely used Congressional Review Act (CRA) were introduced to repeal existing regulations that would restrict coal companies from polluting streams, limit drilling in National Parks, improve planning and public input for BLM lands, and prohibit killing of bears and wolves on national wildlife refuges in Alaska.  If these rules are repealed this leaves some of America’s most treasured landscapes open to threats from drilling and mining and other threats.

These actions are just the beginning of a war on our public lands. Over the course of the next four years we expect renewed Congressional attacks on our bedrock environmental laws, including efforts to sell off federal lands owned by all Americans to oil, gas and mining companies. Washington Wild will continue to stand guard in defense of our public lands, but we need your help!

Please take a minute and send a message to your Congressional Representatives and URGE them to cosponsor H. Con. Res. 27! Tell them to support our public lands. Personal messages make an impact. Feel free to add a comment expressing why public lands are important to you.