Today Washington Wild coordinated a joint comment letter joined by 20 conservation, recreation and wildlife organizations to the Forest Service concerning a proposed plan of operations for the Excelsior Mine, located in Mt. Baker-Snoqualmie National Forest near Wells Creek. 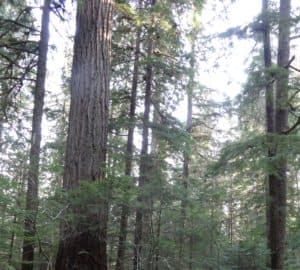 Redevelopment of the mine would directly impact the Mt. Baker North Inventoried Roadless Area (IRA) by building new system roads in the protected area. To create access to the Excelsior Mine, the Forest Service is proposing to reconstruct a decades-old unclassified road through the IRA instead of repairing a road that already exists to provide access to the mine site and which would not violate the roadless rule. In the letter groups strongly opposed new roadbuilding in the Roadless Area and asked the Forest Service to seriously consider an alternative route – fixing a washout on the original access road to the excelsior mine.

This roadless area was part of nearly 60 million acres of unroaded unlogged national forest stands nationwide that were protected from new road construction under the National Forest Roadless Area Rule of 2001. These areas represent some of the last and best remaining intact forests and watersheds which provide clean water, fish and wildlife habitat and world class opportunities for recreationists and the ability for northwest Tribes to exercise their cultural and treaty rights.

This proposal is just one of a number of recent projects that are beginning to show a pattern of threatening Roadless Areas, including the Swen Larson Quarry expansion and national efforts to weaken roadless protections in individual states.

Our roadless areas are comprised of unlogged ancient forests which are underrepresented on national forest lands due to unsustainable logging practices decades ago. Roads also have measurable and important impacts on the watershed and surrounding environment and the area proposed for new road construction has been and should continue to be managed for unroaded values.

The Roadless Rule is a balanced and popular policy that has stood the test of time. With more than one-half of America’s National Forests already open to logging, mining, and drilling, the Rule was intended to preserve the last third of undeveloped forestlands as a home for wildlife, a haven for recreation, a source of clean water and a heritage for future generations. A wide-range of activities are permissible in roadless areas however building roads is not. Building a new road into the Mt. Baker North Inventoried Roadless Area is unacceptable.