Today, the Forest Service issued a final decision consenting to exploratory drilling in the Green River valley, just outside the Mount St. Helens National Volcanic Monument. The Green River flows through old growth forests, roadless areas, volcanic blast zone, and the Mount St. Helens National Monument. This untouched paradise provides critical habitat for salmon, drinking water to downstream communities, and a place where our families can hike and explore. Washington Wild joined a coalition of over 15 conservation and recreation groups opposing the project on a letter to Governor Jay Inslee. 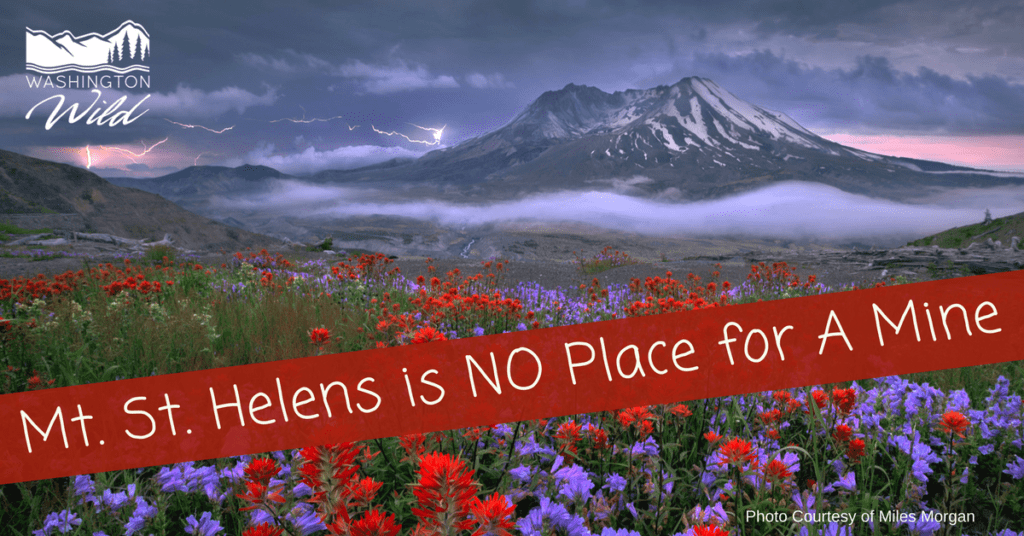 Drilling permits would allow a Canadian mining company, Ascot Resources Ltd., to drill 63 drill holes from 23 drill pads to locate deposits of copper, gold, and molybdenum. The project would include extensive industrial mining operations 24/7 throughout the summer months on roughly 900 acres of public lands in the Green River valley, just outside the northeast border of the Monument. The prospecting permits allow for constant drilling operations, the installation of drilling-related structures and facilities, the reconstruction of 1.69 miles of decommissioned roads, and pumping up to 5,000 gallons of groundwater per day.

Senator Cantwell released a statement on the decision. “Opening the door to drilling at the edge of Mount St. Helens is a short-sighted decision that undervalues the important benefits these public spaces offer both to our booming recreation economy and to families who come from near and far to enjoy their beauty. This mountain should be managed for current and future generations to enjoy, and I hope the Trump administration will cease their efforts to jeopardize that by allowing it to be explored for drilling.”

Some parcels of land in question were acquired to promote recreation and conservation under the Land and Water Conservation Fund Act (LWCFA). In a previous lawsuit a federal judge invalidated Ascot’s drilling permits and held that the agencies violated the LWCFA by failing to recognize that mining development cannot interfere with the outdoor recreational purposes for which the land was acquired. The decision by the BLM and Forest Service to once again issue Ascot drilling permits follows the release of a modified EA in 2017, prepared in response to this prior court decision.

The pristine Green River flows through the Mount St. Helens National Volcanic Monument, passing through old growth as well as a unique post-eruption environment that provides habitat for a variety of native fish and wildlife. The Green River flows into the North Fork Toutle River and Cowlitz River, which provides drinking water to thousands of people in downstream communities. The city of Kelso recently passed a resolution against the mine because of impacts from leaking mine effluent and failed toxic tailings ponds that would result from locating a mine in an active volcanic zone.

People come to this area to enjoy solitude and outdoor recreation activities such as camping, hiking, hunting, fishing, mountain biking and horseback riding.Popular recreation areas include the Goat Mountain and Green River trails, and the neighboring Mount Margaret Backcountry area. It is obvious that this unique and breathtaking landscape is NO place for mining. Write your elected officials today!