Today, the newly elected U.S. House of Representatives passed a controversial provision changing the way Congress calculates the costs and economic value of federal parks, forests and national wildlife refuges, making it easier to sell off our Public Lands. The rules package included a provision that states “all transfers of public lands should be treated as if they have no cost to the federal government.” This allows lawmakers to transfer federal land to the state without accounting for their economic value, implying that our public lands have no intrinsic or economic value and paves the way for transferring or selling off our public lands to the highest bidder. 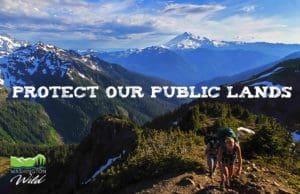 Millions of Americans visit public lands each year to bike, camp, climb, and explore. We all need places we can go to unwind from the stress of everyday life, reconnect with our families, and recharge. Our stunning National Parks, National Forests, and BLM lands support healthy families, millions of jobs, and a thriving outdoor recreation economy.

Over the past year, a handful of politicians backed by private interest groups have launched an aggressive campaign to dispose of America’s public lands. They have introduced dozens of bills in 11 western states that demand that the public “turn over” millions of acres of public land to state governments.

If state governments seize public lands, we will lose public access, public ownership, and the public process on these distinctly American places. States frequently sell off or lease their land, especially during budget deficits and this new provision t is a clear precursor to increased development or outright sale. While the difference between land designations can be confusing, those who love wild places should take note: here in Washington, federal lands make up 28.5% of our state’s total acreage and include National Parks, National Forests, Wildlife Refuges, Wilderness Areas, and historic sites that protect our intact low-elevation forests, healthy watersheds, and where so many of us go to play outdoors.

Over the course of the next four years we expect renewed Congressional attacks on our bedrock environmental laws, including efforts to sell off federal lands owned by all Americans to oil, gas and mining companies. Washington Wild will continue to stand guard in defense of our public lands. We have defended our wild lands and waters from Congressional threats, and we will do it again.

Stand with us to protect our public lands.