In Washington state, we hold our wild lands and ancient forests in high regard. Roadless Rule protections help ensure these places remain wild. Read on to learn more about the importance of Roadless Forests.

What is the Roadless Rule? 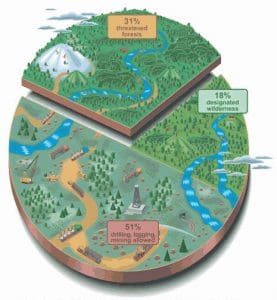 The 2001 National Forest Roadless Area Conservation Rule, or simply the Roadless Rule, is one of our nation’s bedrock conservation protections. It’s a popular and balanced policy that protects nearly 60 million acres of breathtaking, undeveloped national forests from road-building and other industrial activity.

From 1999 to 2001, the Forest Service held over 600 public meetings nationwide, including 28 throughout Washington State. In what was one of the most extensive public participation efforts in the history of federal rule-making, more than 1.6 million people commented during the rule-making process, with 95% supporting strong roadless area protection.

What are Examples of Roadless Areas? 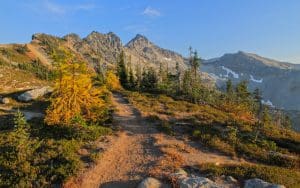 Roadless areas are found across the country, including 2 million acres here in Washington state. Breathtaking places like South Quinault Ridge, much of the Kettle Range, Mt. Baker, and The Dark Divide are all Roadless Areas.

One of the most high-profile Roadless Areas is Alaska’s Tongass National Forest. The Tongass is one of the rarest ecosystems in the world. At nearly 17 million acres of mostly old-growth forest, it’s also America’s largest national forest and a critical carbon sink in the global fight against climate change. Learn more about what’s at stake with this special place. 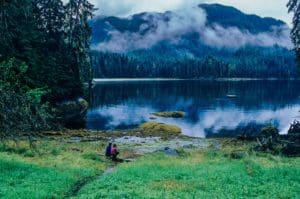 Wild forests are a defense against climate change
Wild forests act as “Carbon sinks.” Trees pull carbon from the atmosphere and store—or “sequester”—it. The underlying soil absorbs some of that heat-trapping gas as well, making forests an increasingly valuable tool in combating climate change. The Tongass stores more climate-disrupting pollution in its old growth forests and rich soils than any other national forest in the United States – earning its name, “America’s Climate Forest.”

Roadless areas support thriving populations of fish and wildlife
Logging and road building pose major threats to salmon populations and all those who rely on them, including Southern Resident orca. The Tongass supports healthy salmon runs for all 5 species of Pacific salmon, as returns across Washington State continue to show declines. 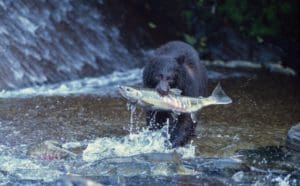 Nearly 2 million acres in Washington State are protected under the Roadless Rule, including large swaths of Wenatchee-Okanagan National Forest, the Dark Divide in the Gifford Pinchot National Forest, and South Quinault Ridge on the Olympic Peninsula – all magnificent places that shape our legacy as a wild and green state. In 2019, the Trump Administration announced an extreme proposal to roll back Roadless protections in the Tongass. Exemptions to the Roadless Rule anywhere are a threat to Roadless Areas here in Washington.

Currently, the Biden Administration has announced a plan to reinstate Roadless protections in the Tongass.

Washington Wild has fought to defend roadless areas across Washington since 2006 and led local opposition to the Trump Administration’s extreme proposals in the Tongass.

Read more about the history of our work fighting for Roadless Forests at the links below.

Yesterday marked the end of the 60-day formal comment period to collect public input on the Biden Administration’s proposal to restore National Forest Roadless Area protections in Alaska’s Tongass National Forest. The proposal would reinstate a Trump Administration repeal of the Alaska Roadless Rule, which stripped away long-standing protections for nine million acres under the […]

The Biden Administration recently announced steps to restore national forest roadless area protections in Alaska’s Tongass National Forest. The proposal is a repeal of the Trump Administration’s 2020 Alaska Roadless Rule, which stripped away long-standing protections under the 2001 Roadless Rule, a federal safeguard that restricts logging and roadbuilding in designated wild areas. A 60-day comment […]

This action is now closed. Thank you for submitting your comment!