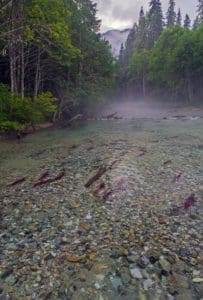 Washington State is blessed with incredible rivers that deliver clean cold water to salmon, wildlife, residents, businesses and the Puget Sound. They are central to our unique quality of life. However, few of these rivers are permanently protected from new dam construction, unsustainable logging, mining and unmaintained roads. For example, Washington State has only 250 miles of designated Wild & Scenic Rivers compared to Oregon’s 2,000 miles.

The National Wild & Scenic Rivers System was created by Congress in 1968 (full description of WSR Act) to preserve certain rivers with outstanding natural, cultural, and recreational values in a free-flowing condition for the enjoyment of present and future generations. The Act is notable for safeguarding the special character of these rivers, while also recognizing the potential for their appropriate use and development. It encourages river management that crosses political boundaries and promotes public participation in developing goals for river protection.

Washington Wild works with coalition partners to support river management on our public lands and oppose logging, mining and other development that threaten to adversely impact river values. While we understand and support hydro-electric power as a renewable and clean energy source, we oppose proposals to add new dams to free flowing rivers. A better strategy is upgrading power production from the many aging dams that already exist on our rivers and streams.

In response to the comment period initiated by Governor Inslee and Senator Murray to solicit public input on a draft report regarding the lower four Snake River dams, Washington Wild coordinated a comment letter undersigned by 137 entities in support of moving forward with a final proposal that includes an actionable solution to breaching the […]

On June 9, U.S. Senator Patty Murray and Governor Jay Inslee announced the release of a much-anticipated independent draft report that identifies how to replace the services and benefits of the lower Snake River dams if they were to be breached. The release of the draft begins a one-month comment period to solicit public feedback […]

On April 27, Washington Wild sent a letter undersigned by 27 conservation, recreation, wildlife organizations, and businesses to the Washington State Recreation and Conservation Funding Board. The letter supports funding for an access site in the North Fork Nooksack River that will promote safe and responsible recreation, enhance ecological restoration, and benefit local economic prosperity. […]