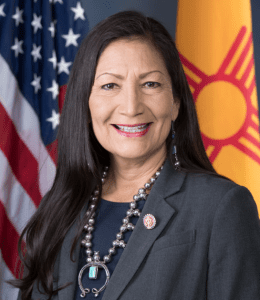 On March 15th, Rep. Deb Haaland was confirmed by the U.S. Senate as the next Secretary of the Interior with a bi-partisan vote of 51-40. Today, she was ceremoniously sworn in by Vice President Kamala Harris.

Haaland, a representative from New Mexico and a member of the Laguna Pueblo, is a historic pick by the Biden administration, making her the first Native American Cabinet Secretary in U.S. History. As a member of Congress, she has considerable credentials on climate, conservation, and energy issues, making her a proven leader for the job.

The Department of the Interior (DOI) manages the country’s public lands (equating to one-fifth of all the land in the U.S. and 1.7bn acres of coastlines), endangered species, and natural resources, and is also responsible for the government-to-government relations between the U.S. and Native American tribes. The appointment of Haaland is long overdue for the agency, which has of failing to consult Tribes while enacting public lands policies against the better interests of Indigenous communities.

In an interview with The Guardian, Haaland said:

“I’m going to continue to reach across the aisle, to protect our environment and make sure that vulnerable communities have a say in what our country is doing moving forward.”

Haaland’s confirmation is a much-needed step toward reckoning with a troubling legacy while building new, equitable achievements. Haaland has been a leader in pushing the U.S. to embrace a national goal of protecting 30 percent of lands and waters by the year 2030, which scientists say will help stem the ongoing extinction crisis and deterioration of the natural world.

She was an original cosponsor of a bill directing DOI and U.S. Forest Service to achieve net-zero greenhouse gas emissions from public lands and waters, recognizing the role of fossil fuel extraction on public lands driving climate change.

Climate change is a universal environmental and social justice issue — and one of the most urgent of our time. As countries around the world are ramping up efforts to address it, we in the United States have public lands and waters which provide an immediate opportunity for the federal government to act on climate change. The appointment of Haaland as Secretary of the Interior offers a promise for meaningful action in putting our public lands to work in the fight against climate change.